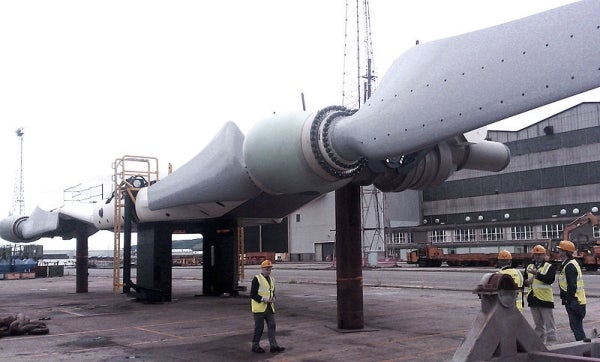 "The best places for tidal power are probably the last places in the world you’d actually choose to stick a generator," says green energy consultant Cerys Watkins. While strong currents and the naturally corrosive environment of the seafloor make damage and fatigue inevitable, the depths of water and remote locations typical of ideal sites combine to present a major challenge to any necessary repair and maintenance work.

"With UK waters offering such a big potential resource – particularly in the European context – it’s probably not surprising that so much research is being done here to improve [turbine] life expectancy."

It is a point echoed by Dr Tim Stallard, senior lecturer at the University of Manchester’s School of Mechanical Aerospace and Civil Engineering – and one of the team involved in a number of programmes investigating marine energy devices.

"From a research community point of view, I think it’s fairly recognised that more has been done in the UK that is directly applicable to industry as it currently stands than there has elsewhere."

The researchers are also contributing to the Performance of Arrays of Wave and Tidal Stream Systems (PerAWaT) and Reliable Data Acquisition Platform or Tidal (ReDAPT) industry-academia research programmes commissioned by the ETI, to improve understanding of turbine behaviour. Their main focus has been on the effect of turbine wakes on the loading of other, downstream turbines and the evaluation of numerical tools for use in design optimisation.

"Quite a lot of work has been done with CFD [computational flow dynamics] for predicting mean loads on the systems, but not that much has been done to date on predicting the loading due to the very unsteady conditions we get at tidal stream sites," Stallard says. "We’ve done some work over the past four years looking at fully resolving the geometry of the turbine to be able to simulate the time-varying loads over the order of less-than-seconds due to turbulence in flow."

That, he says, involves simulating the turbine, and then being able to simulate the flow variations encountered in the real world accurately – which is the part of particular relevance to the tidal energy industry.

"Modelling unsteady loads over the order of seconds through to minutes is the really important bit for fatigue analysis, as well as structure design and bearing design, reliability, pitch control mechanisms – all the operational aspects of the machine follow from being able to model the environment accurately and model the response of the system to the environment."

"Cambridge University is hosting another EPSRC project intended to increase the life of marine turbines through design."

Cambridge University is hosting another EPSRC project intended to increase the life of marine turbines through design and innovation, by developing two novel technologies to reduce the unsteady loads which arise from flow variations, and so achieve significantly increased turbine lifespan.

Marine turbines experience much larger unsteady loads than their counterparts in the wind energy sector, as a result of both the higher density of water compared with air and the inherent unsteadiness of the underwater environment.

Add to this the high-fatigue effect of salt water on the mild steel structures typically used to support them, and, according to the Cambridge researchers, the 30-year design requirement quickly translates into a useful life that can be measured in as many months.

Currently, this imposes major limitations both on the turbines themselves, and on the locations where they can be realistically deployed.

Hydraulic drive trains are one of the technologies being investigated, offering a possible solution to the problem by allowing the speed of the turbine to respond quickly to what the team describes as large underwater ‘gusts’ and so ensuring that the loading on the generator remains constant.

"Hydraulic drive trains are one of the technologies being investigated, offering a possible solution to the problem."

In January, Japan’s Mitsubishi Heavy Industries began testing a large-scale system that works on broadly similar principles, as part of a project to develop hydraulic drive trains for offshore wind turbines, but the technology being developed in the UK is a new and highly innovative entrant to the tidal energy arena.

While the hydraulic drive train technology is designed to cope with large ‘gusts’ – those defined as larger in length than the diameter of the machine itself – the second approach being tried is intended to address shorter-length unsteady flows and draws on the same concepts used in the aerospace industry to dampen similar gusts in air.

The idea is to employ fluid ejection spoilers or flaps on the turbine blades to keep the blade lift constant as the unsteady flow passes over it, and so reduce the load fluctuation. It is hoped that this technology, once perfected, will form a suitable alternative to variable pitch systems to help ensure that peak loads are not exceeded.

Other research groups – notably at Southampton and Cranfield – are looking at blade materials, and blade deformation both over the period of rotation of the turbine and in shorter-duration events in an attempt to model dynamic response and the longer term implications that might have for fatigue.

"Technology being developed in the UK is a new and highly innovative entrant to the tidal energy arena."

If it can do the same for tidal turbines, it could well have major benefits, since the interactions of the localised flows over the individual blade and turbine components in water – being a denser fluid than air – make for a uniquely complex load distribution that varies over time, generating particularly challenging patterns of stress distribution.

Going further still, novel materials could ultimately hold the key to cheaper blades, as well as reducing the load on pitch control mechanisms and possibly even opening the way to have passive deformation of the blade contribute to power production.

In the long-term, if the goals of the industry are to be met, it seems the challenge is to maximise energy production without compromising turbine life. It is an objective that a team at Cardiff University is currently trying to bring closer with its research into the effects of tidal flows on the performance and structural integrity of marine devices.

A major part of the team’s study will focus on the impact on reliability, maintainability and survivability, with special attention being paid to life-shortening issues of stress and fatigue.

Watkins says all these strands of research will be critical for the future development of marine energy. "We tend to forget that it’s still a very early phase in its development. There are plenty of similarities with other things and lessons to be learnt from offshore oil and wind energy but they’re limited. Hydrodynamics isn’t aerodynamics, and turbines aren’t oil platforms. The key is good research, novel research, that can feed back into good designs."

A mostly positive Environmental Impact Assessment released this week for a proposed £550m project off the coast of Wales could see the world’s first purpose built tidal lagoon built in Swansea, Wales, in the UK.