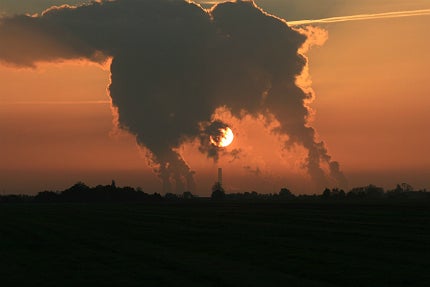 Researchers in Australia have pooled their advanced chemistry knowledge to find an innovative solution to one of Australia’s, and the world’s, most pressing issues – how to reduce greenhouse gas emissions. The team, made up of researchers from the Centre of Advanced Nanomaterials at the University of Adelaide’s School of Chemistry and Physics, as well as the Commonwealth Scientific and Industrial Research Organisation (CSIRO), has created a new nanomaterial that works like a sieve, to reduce carbon dioxide emissions from coal-fired power stations.

The material, called a metal organic framework (MOF), can efficiently separate carbon dioxide from nitrogen, the other significant component of the waste gas released by coal-fired power plants, which would allow the greenhouse gas to be separated before being stored, rather than simply released into the atmosphere.

"A significant proportion of Australia’s carbon dioxide emissions come from coal-fired power stations, and we wanted to use our chemistry knowledge to find a way to make a difference," says the project’s leader, associate professor Christopher Sumby, an ARC Future Fellow at the University of Adelaide’s School of Chemistry and Physics. "We’re certainly not the first people to use these materials for this purpose, but we have found a unique way to go about it."

Sumby and his team had been synthesising nanomaterials for years when they realised – through a technique called x-ray crystallography, which is essentially the use of a high-tech microscope – that one of the materials they had created had pores that were exactly the right size for carbon dioxide molecules to fit through.

"It acts like a sieve, so only things that are of a certain size can fit into the material, and everything else will go around it," Sumby explained.

"In this material the pores are just big enough to fit carbon dioxide into the material, but they exclude the other major component of flue gas, which is nitrogen."

This differs from the way in which nanomaterials like this have been used in the past to capture carbon dioxide. "There are materials out there that do absorb quite a lot of carbon dioxide," Sumby noted. "But they do that by making themselves more attractive to carbon dioxide, so the carbon dioxide sticks more effectively to the material."

It’s not known precisely how this new MOF would be used on an industrial scale yet, but Sumby reveals that the material, if developed to a commercial level, would be far less energy-intensive than current forms of carbon capture.

"This differs from the way in which nanomaterials like this have been used in the past to capture carbon dioxide."

Indeed, the most well-established technique to remove carbon dioxide from gas streams is a technique called amine scrubbing technology, which can use 25-30% of the energy of a power station just to capture the carbon dioxide.

This could make carbon capture and storage (CCS) technology, which is currently far from widespread largely because of the huge costs involved, much more affordable, and, therefore, a viable, low-emission stop-gap technology between pure coal-fired power generation and the renewable power plants of the future.

"It’s something we could use for the next 50-60 years," Sumby believes. "You could take advantage of the huge investment in infrastructure for coal-fired power generation, potentially retrofitting this type of technology to existing power plants. There are considerable coal reserves, so it has the potential to provide that interim technology until we go to solar fuels and the like in generations to come.

"This technology might also allow people access to poorer quality or lower grade coal reserves. If you could set these materials up to scrub carbon dioxide and other gases such as sulphur oxides, perhaps brown coal technologies could be possible."

Of course, this is crystal ball thinking and there is still a lot of work to be done before MOFs can actually be used to separate carbon dioxide and nitrogen in industrial scenarios. Indeed, for Sumby, the commercial use of this technology is at least ten years away; not only does a real-world solution need to be developed, costs also need to be brought down and pilot schemes initiated.

"Amine scrubbing technology can use 25-30% of the energy of a power station just to capture the carbon dioxide."

"One of the challenges is to find an engineering solution that allows you to use the really good selectivity of the material in a way that would work in a power station, where, in the post-combustion stage, there are quite low pressures," Sumby says.

One of the methods he thinks holds promise would be embedding the nanomaterial into a membrane. "Membranes are already used in industry to separate gas mixtures so, perhaps, this material could be used to enhance the separation properties of existing membranes," he suggested. "The only challenge is that you need reasonable pressure to force gases through membranes, so we are still considering that option."

Whichever MOF technology is moved forward to be developed, it will be at least five years before it will be tested at pilot scale, Sumby predicts. "Potentially it could be the next technology to be used in this application, but we’re talking at least ten years before it’s really going to be commercially viable," he adds.

In the meantime, Sumby and his team are looking at alternative applications for this novel nanomaterial. "We think one way of deploying this material perhaps more effectively is to purify natural gas," he explains. "When natural gas is extracted, it comes out at reasonably high pressures as a mixture of methane and carbon dioxide and we think we can separate methane from carbon dioxide using the material in the same way. This could even be a better application for this material."

By 2016, all existing large combustion plants in the European Union will have to meet strict emission limits, but will they be ready to?

America is getting serious about its power plant greenhouse gas emissions.