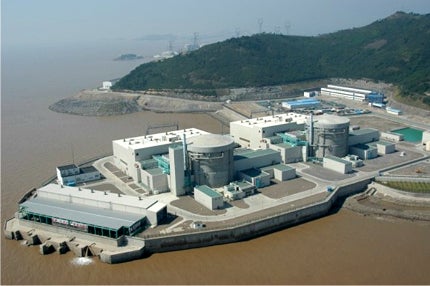 Other contracts in the US and elsewhere have focused on the development and construction of a number of prototypes of different Light Water SMR plants, signalling new focus on the potential benefits offered by smaller plants.

According to Thomas Koshy, head of the Austrian-based International Atomic Energy Agency’s (IAEA) Nuclear Power Technology Development Section: “SMRs have advantages when the grid is smaller. SMRs have a smaller foot print, lower cost and a shorter construction period. Another advantage of SMRs is the flexibility to replace a fossil station, exclusively a small industrial complex, or use it dedicated for a non-electric application, such as hydrogen production, desalination, etc.”

“SMRs can also help to add other small units based on the growth in power demand at a convenient pace with incremental funding. The cost per KW may be slightly higher but the savings in the use of existing infrastructure may offset some of it.”

Why the interest in small reactors?

The flexibility of SMRs is the number one attraction, it comes from their relatively smaller power output, as well as their size and site requirements. Furthermore, SMRs offer varied utility when compared to the large reactors.

Instead of just using them for power, they can also be used, among other applications, for heating and desalination. Sites that would be unacceptable for the positioning of a large nuclear power plant become available when using SMRs, because these units are less susceptible to earthquakes and require less space.

Additionally, with a number of SMR units arrayed in a module, the power requirements can supposedly be more precisely matched.

Cost-effectiveness – yet to be fully demonstrated

“Instead of just using them for power, they can also be used, among other applications, for heating and desalination.”

Dr Hussein Khalil, director of the Nuclear Engineering Division at Argonne National Laboratory, Illinois, believes that: “It remains to be demonstrated that the levelised electricity generation cost with SMRs (cost per kw-hour of electricity) can be competitive with a large plant, when the large capacity is needed or can be accommodated. A reasonable case can be (and has been) made, however, that with factory fabrication / automation / replication and lower financing costs (discount rate) SMRs can be cost-competitive.”

Due to the design of SMRs, there are a number of components and safety measures found in the large reactors that have been modified to better suit these small reactors. As a result, and in combination with the reduced materials needed to construct smaller reactors, manufacturing costs are expected to drop.

In addition, the parts required for SMRs are easier to produce locally, eliminating the cost of importing specialised parts. The operating costs are further reduced with a design that allows for less energy consumption for cooling, as well as less staff required for monitoring and maintaining the plant.

The major contribution to construction time becomes excavating and preparing the underground housing for the reactor. Dr. Roger Blomquist, also from the Nuclear Engineering Division of Argonne National Laboratory, reminds us that: “We will not know very accurately how much SMRs will cost until they are built. For commercial reactors, the containment buildings are expensive, so the economics favour putting a large reactor inside a containment building. An advantage of SMRs is the possibility of manufacturing them in factories and shipping them to the reactor sites. The price will be the result of the trade-off between giving up the economy of scale and manufacturing more cheaply.”

Since the 2011 Fukushima Daiichi nuclear disaster, material security has become of key concern. The potential threat of ineffective containment, whether caused by inadequate construction on site, natural disasters, or terrorism, is greatly reduced with SMRs.

“Sites that would be unacceptable for the positioning of a large nuclear power plant become available when using SMRs.”

Use of passive safety measures, such as gravity and convection-driven cooling, as opposed to pumps, allows for less dependence on back-up or emergency generators to prevent over-heating.

The disaster that occurred at the large Fuskushima plant was due to a loss of power and a temporary loss of cooling. This caused the plant to overheat. With the passive cooling system supported by SMRs, such a devastating event would only arise after a few weeks without power.

Furthermore, SMR units are designed to be resistant to seismic activity by utilising an underground pool of water to dampen the tremors caused by earthquakes. Dr Khalil agrees that SMRs greatly reduce the threat of nuclear disaster. The underground containment that will be used for SMRs shield them more effectively from natural disasters.

However, there does remain a risk, and sites will need to be carefully selected, utilising a selection process that includes drilling for core samples and assessing the geological, hydrological and seismic conditions.

The threat of terrorism is ongoing, and nuclear reactors present an easy target for attack. Once again, the underground housing and the thick slab of concrete covering the SMRs would form a shield against the impact of bombs or aeroplane crashes. Add to this the impact absorption properties of the water pool that would surround SMRs and the threat is further reduced.

If a terrorist managed to infiltrate security and plant a bomb in the housing of a SMR, the modular design allows for maximum damage and a more catastrophic effect than a single bomb would have on a large nuclear plant. In this instance, the proposed design of the SMR is a disadvantage. Security will need to be high to prevent such an attack.

In the event of nuclear fallout, the current evacuation zone for large reactors in the US is ten miles, with nuclear effects being felt up to 100 miles from the plant. This evacuation zone could possibly be safely reduced to half a mile when SMRs are in use. Although there is never a guarantee that there will be no fallout with SMRs, the 95% reduction the safety radius demonstrates cannot be ignored.

In the event that multiple SMR units are used at a single plant, they would need to be individually housed in order to prevent “multi-unit interaction events” propagating fallouts between the units. If this did occur, the fallout could be equal to that of a large reactor, although this is speculation that requires further study.

“Since the 2011 Fukushima Daiichi nuclear disaster, material security has become of key concern.”

Instead, he proposes that: “They provide an additional option – where generation needs are limited, or where addition of generating capacity in small increments provides a financial advantage.” This makes it especially unlikely that SMRs will be able to replace larger units in countries such as China, where energy demands are high.

Yun Zhou, research fellow at the Belfer Center’s Project on Managing the Atom and International Security Program, Harvard University, Massachusetts, says: “I don’t believe SMRs could replace large reactors in the next 60 years in countries like China, where there are huge energy demands; 1GW will remain dominant due to its economic advantages.”

The future of SMRs

So, are SMRs the way to go? Dr Khalil believes they are an attractive option, specifically for regions in the UK that lack connection to an electricity grid or do not have access to a large electricity grid. The relatively small cost of supplying electricity through nuclear reactors, as well as the reliable supply of that electricity, makes it an affordable option and would also allow the UK to diversify their energy and fuel suppliers. He concludes that: “SMRs should be viewed as an expansion of choices among nuclear reactors, with attractive potential for safety enhancement but unproven economics. Their merits need to be carefully evaluated in the context of national and regional energy planning.”

Intermittent supply is an ongoing problem for the development of the renewable power market. Could cryogenic energy storage prove the best way to reduce waste by saving off-peak power for later use?

US Leading the Charge in Small Modular Reactor Development