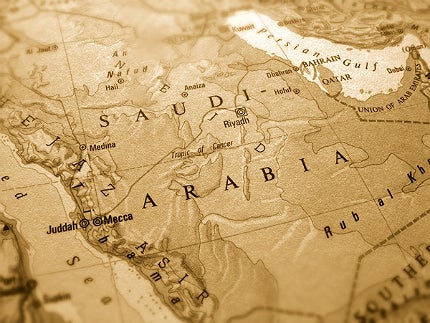 In order to support the development of nuclear power, the country established the King Abdullah City for Nuclear and Renewable Energy (KA-CARE) in 2010, as an agency responsible for supervising nuclear energy and radioactive waste-related activities.

It plans to commence activities on its first nuclear site by 2014. In May 2012, KA-CARE projected that, by 2032, 17 GW of power will be produced through nuclear energy, contributing one sixth of the country’s total power at that point.

Saudi Arabia’s lucrative oil fields are slowly drying up due to the high production levels necessary to meet domestic power demand. The country produces around 9.8 million barrels (MMbbl) per day of crude oil and burns approximately three MMbbl per day of crude oil for their indigenous consumption.

At this rate, the country can produce and export its oil resources for a maximum of 74 years, based on its existing 265 billion barrels of proven oil reserves. This may significantly hinder the country’s export levels and result in an economic slowdown.

At present, around one third of the daily produced crude oil in Saudi Arabia is consumed domestically, although its export could generate a huge amount of revenue.

Saudi Arabia has a current population growth of three percent and an economic growth rate of 5.8% per annum, and the country utilises a large share of its precious oil resources in order to sustain its rapid industrial development and meet the growing demand for electricity.

Saudi Arabia is facing serious environmental challenges, such as water scarcity, droughts and land degradation due to climate change. All currently-operating power generation and desalination plants in Saudi Arabia are run on oil and gas, which release numerous toxic gases and add to the country’s environmental problems.

Around 70% of Saudi Arabia’s portable water is produced by around 30 desalination plants which operate in the nation, and around 28GW of electricity in the country comes from Integrated Water and Power Plants (IWPP).

All water desalination plants currently operating in Saudi Arabia are fuelled by crude oil, and the country burns approximately 1.5 MMbbl per day of crude oil in the desalination process alone, which is economically and environmentally very unsound.

Nuclear power could play a significant future role in powering the desalination process and freeing up crude oil for export. Some small nuclear reactors, such as the System-integrated Modular Advanced Reactor (SMART) and Central Argentina de Elementos Modulares (CAREM), which are suitable for the water desalination process, are being contemplated for installation in the country.

To make the first move towards the development of nuclear power, Saudi Arabia, along with other Gulf Cooperation Council (GCC) members, signed a co-operation agreement with International Atomic Energy Agency (IAEA) in February 2007, for a feasibility study on establishing a nuclear power plant as well as a desalination plant.

Saudi Arabia has also participated in the Proliferation Security Initiative (PSI) by submitting a diplomatic note to the US. In addition to this, the country has established itself as the 71st nation to join the Global Initiative to Combat Nuclear Terrorism.

Saudi Arabia has also entered into several co-operation agreements with nuclear-advanced countries such as the US, France, China and South Korea, pertaining to technology and expertise sharing, research and development, training, waste disposal and environmental protection, to facilitate the development of nuclear power plants.

These agreements will enable the country to advance its research and development activities, and develop its human and infrastructure resources based on the prior experience of countries with existing nuclear capabilities.

In 2008, Saudi Arabia signed a memorandum of understanding with the US regarding civil nuclear technology. The main motive behind the agreement was the development of civil nuclear power for the purpose of medicine production, industrial usage and power generation.

“Around 70% of Saudi Arabia’s portable water is produced by around 30 desalination plants which operate in the nation.”

In January 2011, Anne Lauvergeon, the CEO of AREVA, announced a nuclear and solar partnership agreement between French Areva SA and Saudi Arabia’s Binladin Group (Saudi Binladin) for the development of nuclear and solar sources of energy.

As per the agreement, AREVA, the leader in the field of nuclear reactor design and equipment manufacturing, will help Saudi Arabia’s Binladin Group to construct nuclear power plants in the country.

In June 2011 Saudi Arabia signed a co-operation agreement with Argentina for nuclear powered desalination technology. With the help of this agreement, Saudi Arabia is planning to install Argentina’s CAREM reactor, which is suitable for cogeneration and desalination in the country.

Saudi Arabia signed a co-operation agreement with South Korea in November 2011 for the development of civil nuclear power. The scope of the agreement included co-operation in research and development in the field of reactor construction and power generating facilities, staff training, waste management and safety. Additionally, this agreement may enable the country to establish South Korea’s SMART reactor in Saudi Arabia, for the process of desalination.

In January 2012 the country signed a scientific, technological and economic co-operation agreement with China. The agreement also spotlights nuclear safety and environmental protection. In January 2013, the chief executives of Electricite de France SA (EDF) and Areva SA, along with Arnaud Montebourg, the French industry minister, visited Saudi Arabia in order to participate in the nuclear development program. Both companies have already established a common office in Riyadh, Saudi Arabia, to create a local presence and enable co-operation with domestic companies.