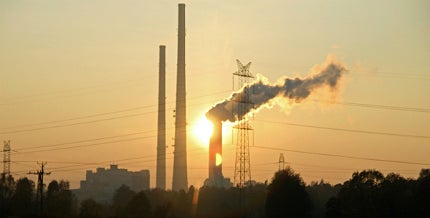 The need for cleaner, more efficient and economical coal power has fuelled the evolution of ever more advanced product designs in supercritical (SC) technologies, raising the bar for equipment manufacturers working in the sector.

In SC and USC steam conditions the water in the boiler is subjected to such high temperatures and pressures that no clear distinction is left between its liquid and gaseous phase.

"The basic difference between SC and conventional subcritical technology lies in the steam / pressure conditions."

In SC technology, water reaches a pressure of more than 221 bar (saturation temperature 370°C). At an operating pressure of up to 190 bar the cycle is known as subcritical, indicating a non-homogenous mixture of water and steam in the evaporator section of the boiler.

Other terms such as advanced supercritical (ASC) and USC signify further increases in the steam / pressure conditions to enhance overall efficiency. ASC operates above the critical point for water / steam (250 bar), whereas USC operates at an even higher pressure of 290 bar.

Steam turbine cycle efficiency gains are evaluated through increases in steam pressure and temperature. Drastic improvements in power plant performance can be achieved by increasing inlet steam conditions from the conventional 165 bar / 538°C (2,400 pounds per square inch [psi]/1,000°F) single-reheat cycle to levels up to 310 bar (4,500 psi) and temperatures to more than 600°C (1,112°F).

Every 28°C (50°F) increase in throttle and reheat temperature results in approximately a 1.5% improvement in the power plant’s heat rate.

The most recent advancements in boiler technology have been made through improvements in expansion efficiency by reducing aerodynamic and leakage losses, achieved through evolutionary advancement towards greater power density and efficiency.

A high power density has been achieved through the development of improved rotor and bucket alloys along with improvements to the design and analysis of attachment devices for the vanes. This has resulted in increased allowable stresses, enabling the construction of longer last-stage buckets for increased exhaust area per exhaust flow.

Recent developments in SC technology for improving expansion efficiency have been achieved through the implementation of new technology, such as:

GE’s designs using dense pack components, for instance, have further improved efficiency by addressing the major sources of aerodynamic loss in impulse steam turbines. This is achieved through the following stages:

Increasing awareness of the need to boost efficiency and reduce emissions has paved the way for advancements in SC technologies, because they facilitate a reduction in harmful greenhouse gas emissions.

"Increasing awareness of the need to boost efficiency and reduce emissions has paved the way for advancements."

While the global efficiency level of an average coal-fired plant is currently 28%, state-of-the-art SC coal-fired power plants can achieve an efficiency of more than 45%.

They also require less coal, which additionally reduces emissions and fuel costs. As such, SC has become the norm for new plants in industrialised countries.

Companies around the world have undertaken various joint initiatives in order to further increase the use of SC technologies in the power market. In years to come, power capacity additions, especially in the Asia-Pacific region, are expected to be heavily dependent on coal-fired power plants, despite government polices to leverage the outcomes from renewable sources.

Particularly in countries such as India and China, where most power is generated from coal, government and power utilities are focusing more on SC technologies to reduce emissions and enhance overall efficiency while providing clean, secure and economical power.