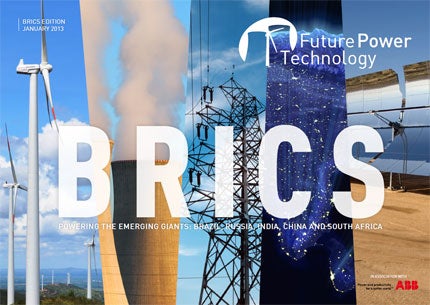 Future Power Technology takes a look at the power industry in the BRICS nations. We find out how Brazil’s decision to slash electricity taxes and lower energy costs could affect other energy producers in the region, and look at the country’s efforts to complete the 1,224MW Angra-3 nuclear reactor project which has been on hold since the mid-1980s. We also ask how Atomflot’s expanding nuclear icebreaker fleet could prompt a dramatic turnaround for Russia’s coal export prospects.

Are energy shortages and local politics standing in the way of India’s economic growth? We investigate issues that are plaguing India’s energy industry. We also look at the tension in the global solar power market as voices in the West claim China’s exports of solar panels below market value are damaging local industries, and investigate the causes of the long delays in South Africa’s nuclear programme.

A Bold Move Brazil slashed electricity taxes and lowered energy costs in September 2012 to re-energise the country’s economy. The expert explain what the decision means for energy producers in the region. Click here to read more.

Industry Project: Angra-3 Nuclear Plant The Brazilian Government has announced plans to complete the 1,224MWe Angra-3 PWR nuclear reactor project, which came to a halt in the mid 1980s. We take a look at the project, which is scheduled for completion in 2015. Click here to read more.

Industry Project: Tuppadahalli Wind Farm We take a look at the 56MW Tuppadahalli onshore wind farm that is being built in Karnataka as part of India’s plan to install 82,000MW of wind power capacity by 2022. Click here to read more.

East vs.West The US and EU are on the brink of a trade war with China over the alleged ‘dumping’ of cheap solar panels. As China launches its own investigations, could the situation hamper future solar development? Click here to read more.

Atomic Friction On paper it would seem that South Africa is a perfect market for nuclear development but a delay in the government’s nuclear fleet programme has led experts to question the country’s readiness to commit itself to such a scheme. Click here to read more.

Next Issue: A Place in the Sun

A developer of solar power systems recently announced that it has successfully converted more than one third of direct sunlight into electricity. But the breakthrough comes at an interesting time as many US manufacturers are shutting down their plants, citing pressure from cheaper Chinese competitors. We ask if innovation still pays in solar technology and which areas are seeing progress.

We explore a large-scale, floating solar field concept from DNV that could be used to collect solar energy at sea, and look at the first solar cell made entirely of carbon, a promising alternative to the expensive materials used in photovoltaic devices.

We also look at Tesla’s network of solar-powered chargers for electric vehicles, find out how Tokelau has become the first nation in the world to support itself with solar energy, and find out how crowd-sourced funding website Kickstarter is being used by solar technology innovators.