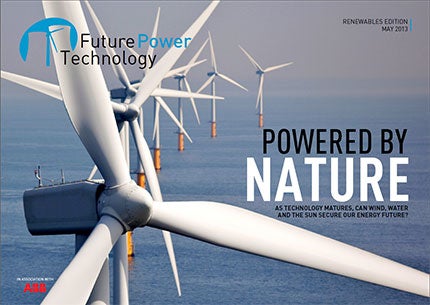 As the European Marine Energy Centre in Scotland enters into its tenth year and all the facility’s test berths are leased out for the testing of a range of new devices, we take a look at progress in the marine power industry and ask what the future holds for this fast-growing sector. We also explore the economic potential of marine energy as a power source for remote island communities around the world.

Moreover, we take a look at how in-pipe hydro technology could harness energy from a city’s water system, and find out how new turbines are being designed to withstand the harshest environmental conditions at sea.

As new solar power projects grow in size, capacity and ambition, we take a look at the world’s largest concentrated solar plant, which recently came online in Abu Dhabi. Finally we profile the 400MW offshore project in the German North Sea, which is due to be complete in 2014 and take a closer look at ED Renewable Energy’s 143MW solar photovoltaic plant in California.

The Home of Marine Power Now in its tenth year, the European Marine Energy Centre has played a crucial role in the development of marine and tidal power. Future Power Technology finds out what’s in store for the marine power industry in the near future. Click here to read the full article.

Powering Coastal Communities The MERiFIC project supports marine power development to boost the self-sufficiency of coastal communities in the UK and France. Click here to read the full article.

Urban Potential In a bid to harness the power from the high pressured water that flows through a city’s system every day, local governments are exploring in-pipe hydropower technology. Click here to read the full article.

Industry Project: Bard I Offshore Wind Farm The 400MW project in the German North Sea received a €53.1m grant under the European Energy Programme for Recovery from the European Commission and is due to come online in 2014 Click here to read the full article.

Industry Project: Catalina Solar Project The 143MW Catalina solar photovoltaic project, located in the Kern County of California, is being developed by EDF Renewable Energy. The second phase of the project is scheduled to commence operation in June 2013. Click here to read the full article.

Next issue: The Future of Fossil Fuels

As the UK’s gas supplies dwindle, British utility Centrica is in talks to secure the country’s first long-term LNG import deal with the US. We find out if the agreement could help the UK reduce its dependence on Norway and the Middle East for LNG shipments, and secure its energy future.

We also look at a new chemical looping technology which has the potential to reduce or eliminate CO2 and NOx emissions from the coal-based power generation process, and find out how India’s power sector is planning to use supercritical solutions to clean up thermal generation. As a new report reveals an ongoing health issue caused by fumes from coal-fired generation, costing the EU €42.8bn in healthcare costs a year, we investigate if a renewed reliance on cheap coals in Europe could be turning into a false economy.

Moreover, we look at the progress of the controversial Keystone Pipeline in the US, and profile major new coal and gas power projects under construction.