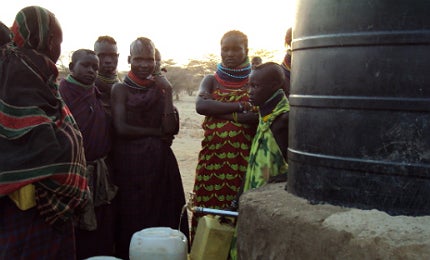 The COVID-19 crisis triggered one of the worst peacetime recessions globally. Even as several economies tread the path to recovery, the surge in COVID-19 cases and emergence of new variants, coupled with geopolitical tensions, will continue to cloud the global outlook.  The Global Risk report uses GlobalData’s proprietary Country Risk Index to determine the existing and future level of global risk by assessing over 50 key indicators, including:   Use our Country Risk Index scores to help you understand future global risk and determine your business strategies, growth plans and investment portfolios.
by GlobalData
Thank you.Please check your email to download the Report.

These people live near Lake Turkana, Kenya. Ethiopian dams could dry up the lake

In April 2011 Ethiopia unveiled its intention to build a $5bn hydroelectric dam by 2015, proudly named Grand Ethiopian Renaissance Dam (GERD), on its share of the Blue Nile. Once completed, it will be the biggest hydroelectric dam in Africa. The government hopes GERD, along with other hydroelectric projects, such as Gibe III on Lake Turkana, will boost Ethiopia’s economy by enabling it to export energy all throughout Africa.

Since construction began in 2011, very little information has been released about GERD. While the government continues to keep its plans close to its chest, what have surfaced, however, are concerns from environmentalists and experts about the long-term repercussions of GERD, both political and environmental, as well as concerns that Ethiopia will be over-reliant on weather-dependent hydro as a power source.

What we know about Ethiopia’s Renaissance Dam

“Since construction began in 2011, very little information has been released about GERD.”

A legacy of Prime Minister Meles Zenawi, who died in August 2012, GERD it is set to be 145m tall and 1,800m (5,906ft) long, with a reservoir of 63 billion cubic metres (bcm), which is almost 1.3 times the annual flow of the Blue Nile (49 billion m³/year). It is located in Beneshangul Gumuz Regional State, about 40km from the border with Sudan.

The government is funding the project by selling bonds to Ethiopians and international buyers – in April last year it was announced that the government of Djibouti had bought the largest amount of bonds by a foreign buyer.

Italian construction company Salini has been awarded a $4.8bn contract to build the dam and Ethiopian Electric Power Corporation contracted the military-run Metals & Engineering Corporation (METEC) to build the electro-mechanical works. They in turn contracted Alstom in January 2012 to supply turbines and generators for the project for 250 million euros ($333m). They will begin work on at the end of 2013.

There were reports at the end of last year that the dam was 14% complete, but in terms of construction, little has been officially released. It’s this lack of transparency in regards to planning and progress that is unnerving NGOs and neighbouring countries.

It’s what isn’t known that is the problem

“There has been huge secrecy on this project and that’s a problem when you are building Africa’s biggest dam on the most important shared river in that part of the world,” says Lori Pottinger, communications and Africa programme representative, at International Rivers (IR), a non-governmental organization (NGO) that has released a report about the potential environmental repercussions of the dam.

“It’s this lack of transparency in regards to planning and progress that is unnerving NGOs and neighbouring countries.”

The report authors ascertained by chatting with workers and locals that, as of April 2012, house-to-house surveys on local communities had been conducted by the government for resettlement purposes, construction of worker-camp facilities were complete, mobilisation of construction materials had been started and access-road construction, clearing sites around the dam site, worker camps and access areas had all been completed.

The IR report, however, is more concerned with the lack of evidence of an Environmental Impact Assessment (EIA) focusing on upstream and down stream areas affected by this specific dam – it estimates the dam could affect 200km of the river course.

Is Ethiopia trying to grab back the Nile?

Egypt has voiced their concerns about the dam before, but has understandably been preoccupied with the Arab Spring to do take them any further. However, it is also thought upcoming elections in Egypt could change the focus back on the dam in the future.

The Blue Nile is the lifeblood of Egypt and its people and critics fear the dam could significantly reduce water flow to the country. 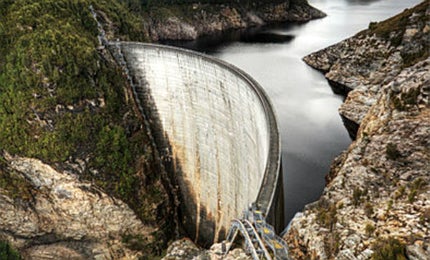 Gordon Dam, in Tasmania, Australia, is another huge hydro dam

“Cairo fears that once the dam is completed … it will take two to three years, depending on rainfall, to fill up the 67 billion cubic metre reservoir, which could reduce the amount of water that flows into Egypt by 25%. After the reservoir fills up, there is no guarantee that Egypt will maintain its present share of the water,” US global security consultancy Stratfor told the media recently.

There are fears GERD may be a tool for Ethiopia to claim back the Nile after 90% of its flow was given priority to Sudan and Egypt in an agreement dating back to the 1920s. Pottinger says: “Ethiopia has been using this dam as a way to assert more control over the Nile — there is good reason Ethiopia is upset about the allocation of Nile waters, but we question whether this unilateral move is the best way to reduce conflict over the Nile.”

Besides the concern that GERD could stoke geopolitical fires with its neighbouring countries, there is a big unknown about how climate change could impact GERD in the future. Would Ethiopia’s best bet be to instead pursuer other forms of renewable energy, such as geothermal and solar power?

“The Blue Nile is the lifeblood of Egypt and its people and critics fear the dam could significantly reduce water flow to the country.”

“Climate change is such a big unknown. We do know that Ethiopia is already seeing longer droughts and worse floods. It’s very unpredictable and it can be very dangerous,” says Pottinger.

Climate change is making it harder for experts to assess what movement a river will have in the future, because it is hard to predict the rain flow. No one knows if GERD, or any of the other many hydro projects Ethiopia is planning, are designed with contingency plans for heavy flooding or long periods of drought.

Ethiopia is considering geothermal, which is not affected by ‘seasonal changes’ in water availability, according to Professor Paul L Younger FREng, from the University of Glasgow, who is currently working on several geothermal projects in Ethiopia.

Younger says: “Geothermal is more compatible with local community development than large-scale hydro. But that doesn’t mean large-scale hydro should not be pursued: if a majority of Ethiopians are to have access to clean, affordable energy, we will need both, and more besides.”

That said, Pottinger points out that neighbouring Kenya is moving away from hydropower to geothermal, saying they can no longer rely on hydropower.

She adds: “They have so many other ways to get electricity in Ethiopia and regionally – for example, microhydro, solar, geothermal and wind. 80% of Ethiopians don’t have electricity and are nowhere near the electric grid.”

For better or worse – GERD is part of national pride

Considering the different factors GERD presents – environmental risks, potential for political antagonism and its somewhat patchy financing – plus the availability of other renewable energy sources that Ethiopia has outside funding for (in late January, the Development Bank of Ethiopia announced it will offer an initial $20m to kickstart geothermal energy projects in the country’s private sector), it’s a wonder Ethiopia’s Government hasn’t bowed to pressure and scrapped the project altogether.

However, GERD appears to be just as much about national pride and sovereignty over the Blue Nile as it is about energy – though 85% of Ethiopia needs electricity the government has already outlined plans to export electricity to Sudan, Egypt and the Arabian Peninsula.

There are blogs written in favour of the project and videos to be found on the internet exuding this sense of national pride and amazement, but it’s very hard to distinguish if this is genuine or government propaganda.

What the people of Ethiopia, especially those living near the project site, really think remains largely unknown as NGOs and journalist aren’t allowed to work in the country. Equally, no one knows what the true consequences or triumph of the GERD will be until, and indeed if, it is finished – the only certainty is that, for now, the government will strive ahead with the project regardless, as a matter of national honour.

The COVID-19 crisis triggered one of the worst peacetime recessions globally. Even as several economies tread the path to recovery, the surge in COVID-19 cases and emergence of new variants, coupled with geopolitical tensions, will continue to cloud the global outlook.  The Global Risk report uses GlobalData’s proprietary Country Risk Index to determine the existing and future level of global risk by assessing over 50 key indicators, including:   Use our Country Risk Index scores to help you understand future global risk and determine your business strategies, growth plans and investment portfolios.
by GlobalData
Thank you.Please check your email to download the Report.