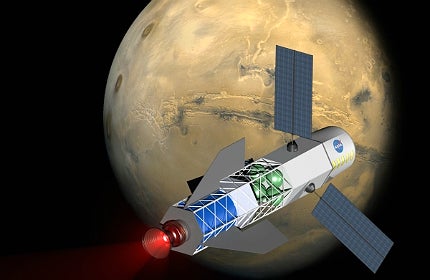 Billions of dollars and decades of research have been spent on recreating the same energy that powers the sun and the stars, but to no avail.

Now, a team of aeronautic experts at the University of Washington say they have developed a unique application to produce fusion power for the production of electricity, and the propulsion of a manned-rocket to Mars.

The scientists are building a ‘fusion engine’ to get a crew to Mars in 30 days, compared to the two years it would take to reach our neighbouring planet using current technology, according to Nasa estimates.

Successful lab tests of the process have been completed. Now, the key will be combining each isolated test into a final experiment that produces fusion energy.

So, if all goes well, could this demonstration finally blaze the trail for fusion use in other devices and applications, such as reactors?

"A team of aeronautic experts at the University of Washington say they have developed a unique application to produce fusion power."

A fusion reaction occurs when two atoms of hydrogen collide to create a larger helium-4 atom, which releases energy. Sounds simple enough, but this process has been met with extreme scientific and technological difficulties.

French Nobel Prize winner, Pierre-Gilles de Gennes, once said of nuclear fusion: "We say that we will put the sun into a box. The idea is pretty. The problem is, we don’t know how to make the box."

Containing extremely high temperatures to combine the atoms together is extremely complicated and has resulted in the failure or delay of major projects during the last 60 years or more.

An international nuclear fusion research engineering project called the ITER is currently building a fusion reactor in the south of France that is designed to produce ten times the amount of power needed to heat up plasma – an ionized gas made of atoms – to required temperatures.

"A fusion reaction occurs when two atoms of hydrogen collide to create a larger helium-4 atom, which releases energy."

Eight years in the making, the project finally received the go-ahead in April to design the reactor "blanket" that will handle the scorching nuclear fuel. But a technical concern is that the super-heated neutrons produced by fusion reactions – responsible for creating 85% of the sun’s energy – will damage the materials from which the reactor is built.

"The containment vessel became the issue," said John Slough, associate research professor at the University of Washington and director of research at the MSNW fusion lab in the state. "The science is sound; it’s the engineering that’s a disaster. Projects like ITER cost $20bn and that’s mostly for engineering," Slough said in a recent interview with the UW’s Daily News.

The fusion engine, being developed by Slough and his colleague Fumio Ohuchi, professor and associate chair of material science and engineering, works on a much smaller scale than fusion reactors and requires only a brief period of fusion reaction in order to power a rocket, eliminating the massive cooling requirements and thermal damage that would result in continuous operation.

To power a spacecraft, the UW team are working on system, funded by Nasa, in which a magnetic field causes large lithium metal rings to collapse around a tiny droplet of plasma, compressing it so it produces a fusion reaction for a few microseconds.

"Slough and his colleagues hope to compress the plasma to create nuclear fusion in the coming months."

The super-heated metal would then be expelled out of the rocket nozzle to provide thrust.

The scientists have validated the metal shell implosion and the ability to form a fuel target, says Slough. "The last piece of the puzzle is to combine the two and produce fusion conditions."

Slough and his colleagues hope to compress the plasma to create nuclear fusion in the coming months, and believe a fusion-powered rocket will be launched into space in the next ten to 15 years.

The team estimates that it will cost around $1bn to develop and complete the rocket and that the costs to launch the spacecraft would be far less costly using fusion technology, as a droplet of plasma the size of a grain of sand has the same amount of energy content as a gallon of conventional chemical fuel.

"We hope we can interest the world with the fact that fusion isn’t always 40 years away and doesn’t always cost $2bn," says Slough.

It seems that developing a fusion powered rocket would be economically feasible, but what about environmental costs? Fusion research may draw concerns over its application in hydrogen bombs.

But fusion use in space transportation is very different, says Slough: "We have a pulsed energy source that is limited by the fuel and motional energy we put into the lithium metal shell with each pulse. This sets how much energy can be liberated from fusion, and it can only be liberated under very precise positioning and timing.

"There is no large energy store that can be tapped inadvertently as is the case with a conventional chemical rocket. The amount produced with each pulse is clearly not enough to damage the rocket under any circumstance. It is only one billionth that of a nuclear bomb."

Indeed, a rocket may not be damaged during a fusion reaction, but as MSNW’s experiments show, the technology is capable of imploding lithium metal rings in just a millionth of a second.

Nuclear fusion is set serve a practical purpose in space propulsion, but with the high level of heat required to create a type of plasma making it almost impossible to combine atoms in any known material for a significant period of time, this is not expected to change the picture for the electrical power grid as scientists hunt for a superior alternative fuel.