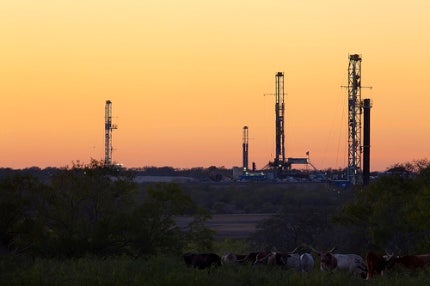 Almost a year after the UK Government temporarily banned Cuadrilla Resources from using the controversial hydraulic fracturing method to drill shale gas in north-west England, a new report published by the Department of Energy and Climate Change (DECC) has given the independent energy company the go ahead to resume its operations.

Hydraulic fracturing, or ‘fracking’, as it’s more commonly known, is now likely to continue, despite the expert report confirming that the exploration process caused two earthquakes in Blackpool last year, in 2011.

The report – published on April 17 – stated that the earthquakes were caused by direct fluid injection into an adjacent fault zone during treatments, but concluded that the probability of further earthquake activity is low.

Despite this safety assurance, environmental groups have condemned the review, stating that unconventional gas development will bring far greater consequences than a few small tremors.

But, are these green activists right to be concerned about the effects of natural gas exploration on climate change, or could this resource offer the best option in delivering a secure supply of energy which could help the UK and other nations like it meet their carbon reduction goals?

"Hydraulic fracturing, or ‘fracking’, as it’s more commonly known, is now likely to continue, despite the expert report confirming that the exploration process caused two earthquakes."

Now that the UK Government has given Cuadrilla Resources the backing it needs to continue to explore shale gas in Lancashire’s Bowland Basin, the firm is hoping to receive the country’s first ever fracking license.

Such a decision could put the UK, which already has a long history of hydraulic extraction, at the forefront of natural gas development. Shale gas, however, has not even reached the pipelines and already public confidence in unearthing this resource has been weakened.

Uncertainties have been raised, specifically in relation to seismic events which were recorded towards the end of 2011 when exploration in Lancashire ceased.

Seismic events on a low level are common in the UK and usually go unnoticed, but the quakes experienced in Blackpool were not natural phenomena and risks of future tremors need to be monitored going forward, according to Jim Pearce, partner from the Energy and Process Industries practice at global management consultancy A.T. Kearney.

Commenting on the independent report published by the DECC in April, Pearce said: "The experience of the US shows that where controls are lax, drillers have not self-regulated to the highest standards. Although earthquakes are rare, these occurrences do undermine public confidence when they occur. This is to the detriment of all stakeholders over the long term."

Another area of concern revolves around the nature of fluid injected into the ground during the shale gas extraction process and the risk of contaminating ground water.

Andrew Austin, chief executive of IGas, a UK-based hydrocarbon producer, claimed there’s been a lack of transparency in terms of the chemical composition of those fluids injected in shale oils in the US, but insisted: "This is not possible in the UK as the environment agency requires full disclosure."

Speaking at the ‘Hype or Hope? Shale Gas and UK Energy Policy’ event hosted by London-based think tank Policy Exchange in March, Austin added: "Despite various scare stories in North America, the Environmental Protection Agency members have acknowledged that there is no reason for drilling activities to be considered to have an adverse impact on aquifers.

"In the UK, this has never been the case and the planning and environment regimes mean that well integrity and isolation of the reservoir is foremost."

IGas stresses the importance of transparency when extracting coal bed methane, but will Cuadrilla take this onboard when fracking for shale gas? Professor Joe Howe, director of the Centre for Sustainable Development at the University of Central Lancashire, thinks so.

"I have been to a number of their [Cuadrilla’s] community group meetings, I’ve talked to some of their directors and I’ve been very impressed by their openness and their honesty regarding some of these issues."

For some energy firms, there is no better time to explore natural gas in the UK. Not only has the government given the green light for fracking onshore shale gas deposits, but newly published research by the British Geological Survey suggested the country may even have enough reserves to compete with natural gas giants such as Russia, Qatar, Iran and the US.

"Professor Howe agreed that shale gas cannot simply replace coal, but said that the resource should not be kept hidden underground."

If we do away with fracking onshore and concentrate on drilling offshore, concerns over seismic activities and groundwater contamination could be alleviated. But, when it comes to shale gas and its potential impacts on the environment, issues over quakes and contamination barely scratch the surface.

According to Doug Parr, Greenpeace UK’s chief scientist, shale gas, which is essentially methane, has a global-warming potential of 23 or 25 – in other words it’s 23 or 25 times more impactful on the environment than carbon dioxide.

"You only need a leakage rate of a few percent to mean that the potential benefits of going down a shale gas route is completely dwarfed by the greenhouse gas impacts," Parr explained, adding that research by the National Oceanic and Atmospheric Administration and the University of Colorado proved his point.

"Actual measurements on the ground suggest that there is a leakage rate of about four percent. That means that the benefits of shale gas under those circumstances, where those emissions are taking place, are negligible or even contrary."

Professor Howe insisted, however, that as long as there is proper regulation is in place, the risk of leaks should not be a cause for major concern.

"I think that with all extraction of gases, of minerals, or resources, there is always the possibility of risk and of leakage," Howe explained.

"I think what we need to insist on as part of the licensing arrangement is that there is a suitably appropriate risk management register in place which adheres to all of the legislative requirements that are in place within the UK. Providing that any mineral extraction or any activities work within the legal framework then I have to say, I am happy to support and endorse it."

Can shale gas and fracking help us build a low carbon future?

"New research by the British Geological Survey suggested the country may even have enough reserves to compete with natural gas giants such as Russia, Qatar, Iran and the US."

As nuclear projects come under threat and coal stations begin to close, an energy gap is opening up, with UK shale developments offering an opportunity to fill this void.

Pearce argued that shale gas is a relatively clean resource which should be exploited. "If the UK is going to use gas we should look for the best available source, which is arguably shale gas," Pearce said.

"Moreover, shale developments may also provide the UK’s chemical industry with a much needed boost if ethane and other NGLs (natural gas liquids) are also found."

The Confederation of British Industry also said that shale gas should play a part in moving to a low carbon economy, as its director for business environment policy Rhian Kelly explained: "It makes sense to explore new gas sources here, rather than increasingly depend on sources from elsewhere in the world.

Dr Parr, however, claimed that shale gas is far from carbon friendly and attempting to use this resource to replace coal could be dangerous.

"A paper by the University of British Colombia looked at the total resource of unconventional gas, including shale gas and coal bed methane, and their estimate was that on their own, these unconventional gas resources would raise global temperatures by more than 2.8 degrees centigrade. Internationally and in the EU, an increase of two percent is considered dangerous for a variety of reasons," he told delegates at Policy Exchange’s shale gas event in March 2012.

"Even if gas has displaced coal use in the US and even if it might displace coal use in China, it doesn’t really help us when all it does is delay that coal burn till later. We have to turn to the question of what is being used, how much is being used and what we should do instead," added Parr.

Professor Howe agreed that shale gas cannot simply replace coal, but said that the resource should not be kept hidden underground.