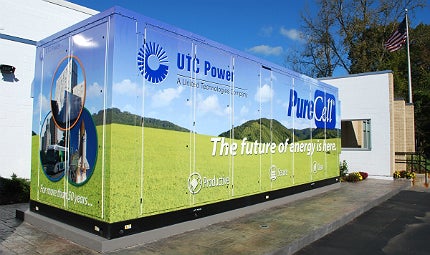 As the simplest element and most common gas in the universe, as well as a fuel with the highest weight-energy ratio, hydrogen is an irreplaceable lynchpin of the world’s power production. In its hydrocarbon form (combined with oxygen), it is the main source of the world’s electrical energy, and the burning of hydrocarbons is the largest contributor to global carbon emissions.

Although hydrogen is central to traditional fossil fuel power generation, it also holds the key to the hydrogen fuel cell, a method of eco-friendly power generation that has been established for decades but has only come into its own as a practical technology in recent years.

Much has been made of the hydrogen fuel cell’s potential as a key technology for zero-emission electrical vehicles; an alternative to the internal combustion engine that has no moving parts and could reduce greenhouse gas emissions by 50% or more.

Comparatively little has been said about the use of stationary fuel cells for direct on-site power generation, an application that is rapidly moving towards the mainstream from its niche as a back-up power option or as a primary generator for remote locations.

The ability of fuel cells to provide clean, efficient on-site power is an increasingly enticing option for commercial businesses, industrial plants and even home-owners, and the technology is emerging as a major driver for off-grid distributed power generation around the world.

Fuel cells convert the energy created by the chemical reaction between hydrogen and oxygen into electricity using a variety of different methods, but all based on the interaction of an anode, a cathode and an electrolyte. So while individual designs like phosphoric acid fuel cells (PAFCs), molten carbonate fuel cells (MCFCs) and solid oxide fuel cells (SOFCs) differ in terms of efficiency and heat produced, they share a number of common characteristics.

"The ability of fuel cells to provide clean, efficient on-site power is an increasingly enticing option for commercial businesses."

One common connecting point for fuel cell technology is impressive environmental performance when compared to fossil fuel power generation. Fuel cell generation produces very few emissions at the source, as no fossil fuel combustion takes place during the process. Data presented by fuel cell advocate Fuel Cells 2000 suggests that stationary fuel cells produce around an ounce of pollutants per 1,000 kilowatt-hours of electricity produced, compared to 25 ounces in the case of combustion-based generation.

Although fuel cells, which also operate quietly and produce 97% less nitrogen oxide emissions, can operate while producing few nasty by-products, the majority still require natural gas to produce their hydrogen fuel using steam reformation. So while on-site pollution is virtually zero, most fuel cells are tied into heavily polluting hydrocarbon infrastructure and so couldn’t strictly be described as renewable or sustainable.

While natural gas is currently the most efficient and cost-effective means of producing hydrogen for fuel cells, cleaner sources are being developed and implemented. Methane biogas is a workable alternative to fossil fuel, using sustainable waste gas created through the anaerobic digestion of biosolids.

Earlier this month, a 2.8MW molten carbonate fuel cell system using biogas went online at a wastewater treatment plant in Ontario, California. The MCFC is being used to offset 60% of the grid power previously used by the facility, and should stand as a compelling proof-of-concept for the efficacy of fully renewable fuel cell power even in strenuous industrial applications.

Off the grid: independent, reliable, efficient

On top of the environmental benefits, fuel cells offer operational advantages that are beginning to catch the attention of major electricity consumers such as office buildings and industrial plants. On-site fuel cells are independent of the grid, making power supply reliable even if the grid suffers power outages.

The advantage of having constant power that is independent of the grid means fuel cells have traditionally been seen as a useful alternative for facilities that need a reliable back-up in the event of a blackout, like hospitals or supermarkets, or for operations in inaccessible locations.

"While on-site pollution is virtually zero, most fuel cells are tied into heavily polluting hydrocarbon infrastructure."

As an extreme example, leading US fuel cell specialist UTC Power’s technology has been used for decades to power onboard equipment on Nasa’s manned space expeditions, logging more than 10,000 hours of operation during 18 Apollo missions without incident. Similarly, UTC’s alkaline and proton exchange membrane fuel cells (PEMFCs) have proved invaluable for submarines and other underwater vehicles.

Increasingly, these advantages are being recognised outside of the traditional fuel cell niche. After all, reliability of up to 99.9999%, or one minute of downtime every six years due to the system’s lack of moving parts, is a major advantage, whether you’re running a headquarters building or a mission into space.

On-site generation also increases electrical efficiency compared to traditional fossil fuel grid power, which averages at around 30 to 35%. Fuel cells typically achieve efficiencies approaching 50%, which can rise to 90% or more if the cells act as combined heat and power (CHP) generators, using waste heat produced in the process to warm buildings.

UTC Power has been leading the charge to introduce fuel cells to mainstream commercial and industrial markets in the US, installing its Purecell 400 phosphoric acid fuel cell at a number of major facilities across the country, with customers including CBS Studios in California, a number of Coca-Cola plants and distribution centres, and Eastern Connecticut State University.

On October 17, Toyota Motor Sales (TMS) in the US activated a 1.1MW fuel cell generator designed by Ballard Power Systems at its headquarters campus in Torrance, California, as a demonstration that its commitment to hydrogen fuel cells goes beyond its development of its hybrid fuel cell vehicle.

"Not only will this new hydrogen fuel cell generator reduce the environmental footprint of our headquarters campus, but it showcases the power and potential of hydrogen as a fuel source," said TMS senior vice president Bob Daly at the launch of the generator.

As fuel cell technology continues to mature and its environmental, operational and economic benefits become more obvious, the stationary fuel cell market is expected to achieve dramatic growth in the near future. The market’s growth in the last few years is a clear indicator of the momentum that the technology is building.

According to Pike Research, stationary fuel cell unit volumes increased at a compound annual growth rate (CAGR) of 27% between 2008 and 2010. The increase in installations is primarily driven by modern-day concerns over grid reliability and fluctuating energy costs, not to mention the government incentives and credits that often come with reducing a site’s carbon footprint.

"Fuel cells can achieve efficiencies of up to 50%, rising to 90% if the cells act as combined heat and power (CHP) generators."

This early growth in unit volumes is an essential foundation for bringing fuel cell technology to the mainstream. Increasing volumes also play a vital role in reducing base technology and manufacturing costs in the standard cycle of tech refinement and commercialisation. Cutting costs will allow the technology to gain a foothold in previously inaccessible sectors such as residential power generation, a market in which CHP fuel cells are already starting to pick up steam in countries like Japan, Germany and Denmark.

Looking to the future, Pike Research has predicted that stationary fuel cell sales volumes will increase to 1.2 million units a year by 2017. In Europe, market analyst Frost & Sullivan has picked out Germany, the UK, France and Italy as particularly receptive to fuel cell adoption, with PEMFCs, MCFCs and SOFCs considered the dominant commercial force in the short-term future.

"The stationary fuel cell sector continues to be the trail blazer for the entire fuel cell industry," said Pike’s research director Kerry-Ann Adamson in 2011. "Technology costs are continuing to fall, new companies are coming into the space, and adoption is gathering steam in markets such as UPS, CHP, and residential power. As such, stationary fuel cells are gaining increased attention and interest from a variety of stakeholders."

There are clearly hurdles that still need to be overcome if fuel cells are going to make the transition from a niche back-up option to a primary power system for factories, businesses and neighbourhoods around the world. Governments will need to find new ways to incentivise adoption; millions will have to be spent on technology refinement to improve performance and bring costs down; and more businesses and institutions will have to be persuaded to move away from the familiarity of the grid.

Despite the challenges ahead, the technology is there. It just needs to be proved to the world. Stationary fuel cells offer a vision of our power future that is cleaner, cheaper and more reliable than ever before, especially if the technology’s reliance on hydrocarbons is eliminated. Truly distributed generation has always played second fiddle to large, centralised power plants, but the continued development of this promising technology could push it into the big leagues.

Making renewable liquid fuel simply from the air and sun sounds too good to be true, but there is one bold power technology company which believes it’s more than just a viable energy solution.

Countries with Lowest Number of Fixed-Line Internet Users in 2021

Countries with Lowest Number of Mobile Internet Users in 2021