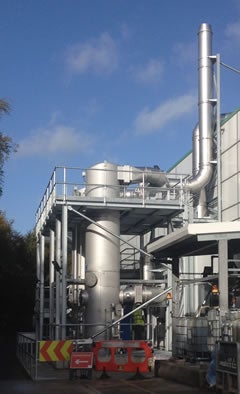 ERG (Air Pollution Control) Ltd has successfully designed, supplied and commissioned a solvent abatement system for Seagate Technologies. Seagate manufactures hard drives at their facility in Derry, Northern Ireland, and required a new scrubber package as part of their £35M factory expansion in 2015.

ERG has supplied two packed tower scrubbers to give Seagate security of treatment through 100% equipment redundancy. The process air extraction system provided by Seagate’s M&E contractor, Total Engineering and Design, links the new wafer manufacturing facility to the scrubbers where solvent fumes from the production process are removed from the air.

The treated air is discharged to atmosphere, enabling Seagate to operate under their emission limit. The solvent used is NMP which has a discharge limit from December 2015 of 2mg/m³.

The scrubber vessels, recirculation pumps, pipework and valves, and internal random packing are all manufactured from stainless steel. The scrubbers were fully fitted out, and the pipework partially trial assembled prior to delivery to site. High specification instruments and a purpose-made control panel are also included in ERG’s scope of supply.

Seagate’s delivery and installation timescale was extremely demanding and ERG, Total and Seagate’s teams co-ordinated closely to ensure the equipment was delivered to site as required. Seagate’s Gerard Owens remarked, "we are impressed by the quality of the package provided by ERG, their responsiveness to our requests, and the service we have received during installation and commissioning."

The solvent is scrubbed from the air stream in the packed tower and the emission concentration is controlled by carefully regulating the addition of clean process water to the scrubber. The solvent solution discharged from the scrubber is directed to the site effluent treatment facility. To avoid the build-up of biological growth in the scrubber, it is also equipped with biocide dosing.

The abatement system was brought on-line in October 2015 and is exceeding the required scrubbing performance.

UK based ERG (Air Pollution Control) Ltd is delighted to announce the addition of thermal...