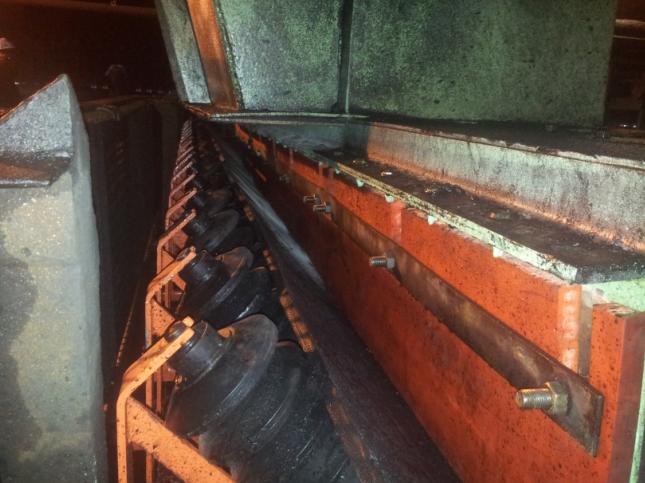 One of South Africa’s oldest and most respected manufacturers of synthetic fuels, lubricants and chemicals is specifying high-performance idler frames and skirt seals on its coal conveyors, helping the company prevent spillage and small particles from escaping the material flow.

Sasol Synfuels was formed in 1950 to commercialize coal-to-liquids (CTL) technology in South Africa, and has evolved into an international integrated energy and chemical company that employs more than 34,000 people working in 38 different countries. The firm develops and commercializes new processes and technologies, building and operating facilities to produce a number of product streams, including liquid fuels, chemicals and electricity.

The firm’s West Coal Processing plant in Secunda produces a wet coal slurry that is pressed into fuel cakes, which drop down a 5m chute. With belt speeds of around 3.6m per second, the operation processes approximately 1.6 million tonnes per month. The large volume of material and relatively high speed had a tendency to release small amounts of spillage, which collected over time into significant accumulations, requiring maintenance workers to remove the potential safety hazards and wash the material down into a specially-designed containment system.

"The effect of that fugitive material was a drain on manpower that had to be pulled away from core business activities to remove the accumulations every day," explained Koos Meyer, divisional manager of the Eastern and Western plants. "It required a large amount of water, and it also left us with a significant amount of waste material that had to be addressed. We were looking for a way to prevent the spillage from escaping the process stream in the first place, so we could avoid the lost material and focus our personnel on revenue-generating activity."

Representatives from Martin Engineering inspected the five belts, which range in length from 12m-20m, and they reviewed the problem areas with Meyer’s crew. "We found that there was a loss of stability in the belt path as it passed over certain idlers," observed technical sales rep Ronald Wilmot. "The unwanted motion was disturbing the material enough to liberate small amounts at a time from the flow. Since there was no skirt seal on these belts, the resulting spillage was uncontained."

During the first phase of the conveyor update, Martin technicians installed a total of 138 Trac-MountTM Idler frames on three 900mm wide belts structures. "Although the belt was 900mm originally, we engineered a 1,050mm Trac-Mount to accommodate a 1,050mm belt due to increased production," Wilmot said.

An innovative design that fits into tight spaces between support cradles, the modular units deliver proper belt carriage to stabilize the load and improve sealing. Yet they can be serviced by a single worker, without the need to raise the belt or remove adjacent idlers. Engineered with a sliding frame on a stationary base, the assemblies can be supplied with steel or impact rolls in CEMA Class A, B, C, D or E.

Once the source of the spillage problem was addressed by stabilizing the belt, technicians also installed 42m of polyurethane skirting to provide additional dust sealing. "We supply large amounts of this skirting to Sasol, primarily because of its durability and flex," Wilmot added. "It works very well in these applications."

The results since the upgrades were completed have been excellent, with Sasol crews reporting near-zero spillage on the refurbished sections. Washdowns in the area have decreased proportionally. "We’re very happy with the upgrades," Meyer concluded. "The equipment is performing well, and the installation was neat and professional."

The final two belts are scheduled for similar upgrades, and that effort has already begun. In addition, Martin Engineering technicians have started work on a nearly identical project at Sasol’s East Coal Processing Plant.

A worldwide leader in bulk material handling technology has announced the formation of a new...

A worldwide leader in belt conveyor technology has become the sole distributor of the acclaimed...