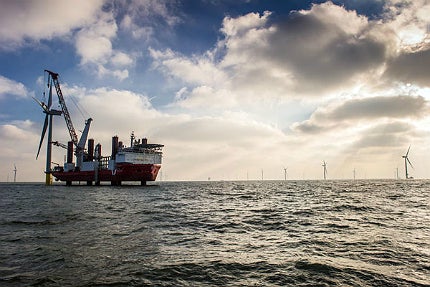 The first turbine was installed in January 2012 and the last turbine was in place within 12 months, to be officially inaugurated in July 2013. The wind farm cuts 900,000t of carbon dioxide a year at its current capacity.

The Greater Gabbard wind farm is jointly owned by Scottish and Southern Energy (SSE) and RWE npower (RWE). It was originally launched by a joint venture of Airtricity and Flour.

The wind farm comprises of 140 turbines rated at 3.6MW each. The turbines are installed on steel monopoles dug 24m to 34m deep in the sea. Offshore installations were carried out by Seajacks’ Leviathan vessel. The turbines were supplied by Siemens.

Bard Offshore 1, located 100km north-west of Borkum Island in the North Sea, is currently the third largest offshore wind farm in the world. The wind farm covers an area of 60km² with 80 turbines rated at 5MW each.

Bard Engineering developed the wind farm. The last turbine was installed by the end of July 2013, marking completion of the wind farm’s construction. The wind farm was officially inaugurated in August 2013. It currently supplies 80% of Germany’s offshore power production.

The turbines of Bard Offshore 1 contain more than 120,000 tonnes of steel. The 200km shore connection of the German wind farm is touted as the longest in the world.

The first 40 turbines of the wind farm were installed in a record seven months, by using a variety of jack-up and support vessels.

Anholt consists of 111 Siemens wind turbines rated at 3.6MW each. The rotor diameter is 120m. The foundations, towers and turbines were developed indigenously in Denmark. The wind farm supplies for nearly four percent of Denmark’s total power demand.

DONG Energy operates Walney, the fifth largest offshore wind farm in the world. The wind farm is located in the East Irish Sea, 15km west of Barrow-in-Furness, Cumbria, UK. The wind farm, built in two phases, has an installed capacity of 367.2MW.

The two phases of the offshore wind farm were grid-connected in January and November 2011. Commercial operation of both the phases started in early 2012.

The Walney wind farm comprises of 102 Siemens 3.6MW wind turbines, 51 installed in each phase. The wind farm is planned to be extended by 120 new turbines, which will increase its installed capacity beyond 1,000MW.

Thornton Bank, Belgium’s first offshore wind farm, is located in the North Sea at water depth up to 30m about 30km off of the Belgian coast. The wind farm was developed in three phases and has an installed capacity of 325.2MW. It currently ranks as the sixth largest offshore wind farm in the world.

Sheringham Shoal wind farm, located 17km to 23km off the Norfolk coast in Greater Wash, UK, with a nameplate capacity of 317MW, ranks as the world’s seventh biggest offshore wind farm. The wind farm is built in a diamond-shaped offshore layout measuring 35km² in area.

Sheringham Shoal consists of 88 turbines of 3.6MW each. The turbines rest on monopole foundations measuring 4.2m to 5.2m in diameter. The operational base of the wind farm is at Wells Harbour on the Norfolk coast. Two offshore substations and one onshore substations form part of the project.

Scira Offshore, a joint venture of Statoil and Statkraft, built the Sheringham Shoal wind farm with an investment of approximately $1.8bn. Statoil is currently the operator of the wind farm, but Statkraft will take over operations from January 2014.

The Thanet Offshore Wind Farm, located 11km offshore of Thanet, Kent, UK, has an installed capacity of 300MW. The wind farm is owned and operated by Vattenfall and is situated in water depths of 20-25m covering an area of 35km².

Construction of the £780m ($1.25bn) wind power project began in 2008 and was completed in 2010. Thanet Offshore Wind Farm commenced operation in September 2010. It is currently the eighth largest offshore wind farm in the world.

The wind farm consists of 100 Vestas V90 3MW wind turbines. The turbines are installed with a 500m distance along rows and 800m distance between rows measure. Each turbine measures 115m high at its highest points.

The Lincs wind farm owned and operated by the British company Centrica is currently the ninth biggest offshore wind farm. The 270MW wind farm, located eight kilometres off the Lincolnshire coastline, was officially inaugurated in August 2013.

The 75 Siemens 3.6MW turbines of the Lincs wind farm generate renewable energy for more than 200,000 homes. Construction of the wind farm started in 2010 and the last turbine was put in place by 31 March 2013. The turbines were installed in ten to 15m of water.

Centrica owns 50% of the Lincs wind farm, while DONG Energy and Siemens Project Ventures own 25% each. The wind farm is designed to operate at least for 20 years before decommissioning.

Horns Rev 2 was also the first offshore wind farm with an accommodation platform. The offshore platform provides accommodation to 24 on-site employees and connects to the transformer platform through an outer gangway.

Offshore wind has the potential to become a major source of energy, but can Europe’s infrastructure support this offshore wind boom?