Upgrading the US grid - building a smart self-healing grid
Menu 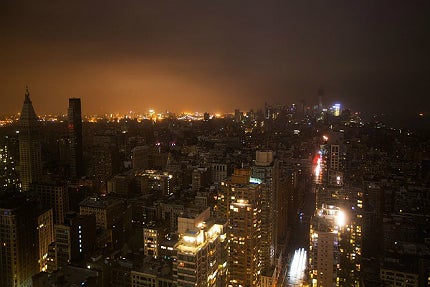 Once hailed the most influential engineering innovation of the 20th century, many of the components, design and underpinning technologies of the North American power grid are now 40 to 50 years old.

Experts are now predicting that without major changes, the current grid will struggle to keep up with the need to reduce carbon emissions and incorporate more renewables, such as wind and solar into the grid.

For the past few decades these same scientists and engineers have been working towards the development of a smart ‘self healing’ grid – a sophisticated electrical platform that can keep itself stable during normal conditions and self-recover in the event of a natural disasters or human error, while also enhancing efficiency and enabling better integration of renewable energy.

North America has experienced a number of power outages caused by both natural disasters and human error. In 2012 hurricane Sandy impacted 24 states in the US, causing major power outages, leaving schools and business unable to open. In 2003 a blackout occurred throughout parts of the North-eastern and Midwestern United States and the Canadian province of Ontario, with many people without power for two days. It is thought the primary cause of the blackout was a software bug in the alarm system at a control room of the First Energy Corporation in Ohio. In 2011 New England experienced a Halloween snowstorm that put millions in the dark for days. These are just a few of the blackouts Americans have experienced in recent years.

A smart self-healing grid would be able to avoid or at least mitigate the impact of these types of problems, ensuring fewer blackouts and for shorter periods.

Although requiring some significant investment before it can be fully developed and integrated, many successful research projects in the US have proven the viability of a smart self healing grid. Academics from two of these projects explain the key components of a self-healing grid, the challenges involved in creating it and the benefits a nation can expect to reap from it.

The components of a smart self-healing grid

"North America has experienced a number of power outages caused by both natural disasters and human error."

Director of the Technological Leadership Institute at the University of Minnesota and an IEEE senior member Massoud Amin (who has led numerous applied projects and several studies into smart grids for two decades, including serving as manager of mathematics and information sciences, where he led the development of more than 24 technologies that transferred to industry, and pioneered R&D in "self-healing" infrastructures and smart grids in 1998) says a smart grid has three primary functions. The first is real time secure monitoring, modelling and reaction that allows the system to constantly tune itself automatically to an optimal state.

The second, functionality and anticipation which enables the system to automatically look for problem areas that could trigger large disturbances.

The third is rapid isolation, which allows the system to isolate parts of the systems of the network that experience failure from the rest of the system, to avoid the spread of disruption and also enable a more rapid restoration.

"By doing these three things the smart self-healing grid is able to reduce power outages, minimise the length of when they occur with much more rapid restoration, plus other benefits that enable integration of renewables," Amin says.

All these components help reduce the likelihood of blackouts, such as the Western California blackout that occurred in 2011 that left nearly seven million people without power for up to 11 hours. It is believed to have been triggered by 23 distinct events that occurred on five separate power grids in a span of 11 minutes.

There have been numerous studies in the last decade or so into ironing out the fundamental and mathematical challenges of making a smart self-healing grid a reality. So what are some of the key technical components that will enable a more capable and more reliable grid to take shape?

"All these components help reduce the likelihood of blackouts, such as the Western California blackout that occurred in 2011."

Adilson E. Motter, a professor of physics and astronomy at Northwestern University, and lead author of a recent report titled ‘Spontaneous synchrony in power-grid networks’, says synchronisation is one key component in creating a self healing grid.

The generators of each interconnection of the power grid – the US to South Canada system has three main ones Eastern, Western and Texas – have to operate in synch, at approximately 60 oscillations per second, in order for the system to function, Motter says.

"In principle synchronisation can be maintained by means of controllers, but since many failures in the power grid are ultimately caused by equipment or operational errors, it is advantageous to avoid unnecessary dependence on conventional controllers," he says.

"We have identified tunable parameters of the generators, such as damping, that when properly adjusted can lead to improved stability of the synchronous condition."

These parameters are shown to depend on the state of the power grid, including the power demand at that particular time, but can be digitally adjusted in real time in the real systems.

Amin says to transform our current infrastructure into a smart self-healing grid several technologies, depending on the needs of the country, will need to be deployed.

"The ideal smart grid system consists of microgrids, mostly self-sufficient power systems, and augmented with a stronger, smarter high-voltage power grid, which serves as the backbone of the overall system to integrate renewables and available domestic energy sources."

"These must be installed throughout a system so it can be digitally controlled, which is the key ingredient to a self-monitoring, self-optimising and self-healing grid."

Motter adds that developing new approaches to improve robustness is also important so that the system will be less likely to experience large failures.

"Most large failures are caused by the propagation of relatively small local failures," he says, adding that, in principle, there are two ways in which improved robustness can be achieved.

"One way is by engineering and maintaining the system in such a way as to prevent the failure of individual components. This should certainly be done, but cannot realistically prevent all failures. The other way is by developing approaches to prevent the propagation of failures, so that small local failures remain small. I believe this second approach, which is at the centre of our research, will have a significant impact in the development of self-healing power grids."

What about the cost?

Nearly $7bn from industry and government in the US has already been ploughed into the study of a smarter fitter self-healing grid, but it will take billions more to make it a reality.

Amin says: "Currently we [North America] have about 450,000 miles of high voltage lines between Canada and US. We need to increase that by about nine percent in the next ten to 20 years in order to make the system more reliable and to integrate less carbon omitting sources".

"Nearly $7bn from industry and government in the US has already been ploughed into the study of a smarter fitter self-healing grid."

According to Amin’s figures, this costs about $2m per mile and amount to $80bn across ten years. For a smarter grid the price tag ranges between $340bn to 480bn. This includes the communication back bone with enhanced security and stability across a 20 year period. Therefore it would be between $20 – 25bn a year for the stronger and smarter grid.

This might sound a long costly investment but Amin is certain it is one worth making.

"Right off the bat the benefits are around $70bn a year from two areas: currently we experience outage per year that cost the US economy between $80bn and $188bn, it would reduce the lower end of these outage by $49bn per year," Amin explains.

The costs cover a wide variety of enhancements to bring the power delivery system to the performance levels required for a smart grid. They include the infrastructure to integrate distributed energy resources and achieve full customer connectivity, but exclude the cost of generation, the cost of transmission expansion to add renewables and to meet load growth and a category of customer costs for smart-grid-ready appliances and devices.

Amin notes: "Despite the costs of implementation, investing in the grid would pay for itself, to a great extent. This is also about economic security, environmental security and national security. We can have increased cyber/IT security, and overall energy security, with security built in the design as part of a layered defence system architecture. And it is about job creation and an economic benefit. With the actual investment, for every dollar, the return is about $2.80 to $6 to the broader economy. And this figure is very conservative."

What will happen next?

As studies continue to prove, a smart self-healing grid can be a reality – Motter and his team illustrated their approach using power grids from various countries and Amin has also done the same at the University of Minnesota, along with many others – but it’s not certain when it will actually become a reality.

"I believe it is just a matter of time for developed countries to have much improved power grid systems, but the implementation of smart grids will depend critically on sustained investment," says Motter.

"China will spend $96bn on smart grid technology by 2020 and is expected to account for 18.2% of global smart grid appliances."

However, there are a few factors hindering large scale development of a smart self healing grid and these, according to Amin, include lack of leadership in the public and private sectors, general uncertainty about ROI, coordination in the investment in the grid, the associated human capital, and in pertinent research and development areas.

Amin notes that an "important constraint on regulatory oversight of the reliability-centred upgrades and security protection is the split jurisdiction over the grid.

The bulk electric system is under federal regulation but the distribution grid, metering, and other aspects of the grid are regulated by individual states. Those local regulations essentially kill the motivation for any utility or utility group to lead a regional or nationwide effort."

For now the future of the smart self-healing grid hangs in the balance, but while discussions and development continue, one thing is undeniable, and that is the increasing importance of the grid as the world moves deeper into a digitised and greener society, and that the grid, one way or another, will face increasing pressure in the upcoming years.