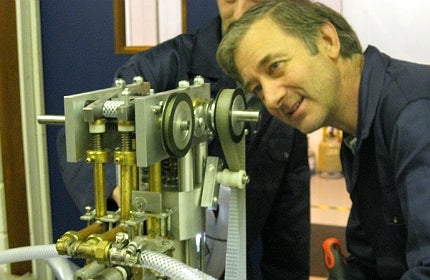 From a young age English inventor Peter Dearman was fascinated by energy storage and finding alternatives to the humble battery. However, after years of experimenting with liquid nitrogen and liquid air, it wasn’t until when Dearman saw a 1999 Tomorrow’s World programme that he discovered, during his work, he had actually successfully invented a commercially viable energy storage and power solution by using liquid air.

"From a young age English inventor Peter Dearman was fascinated by energy storage and finding alternatives to the humble battery."

The programme visited Washington University, where they were trying to find power solutions with liquid nitrogen and liquid air. However, their research had unveiled a seemingly unsolvable problem, a problem that Dearman had already, years before, discovered the solution to.

The university’s confidence in the commercial viability of this kind of technology, with the particular problem solved, gave Dearman the confidence to go commercial with his invention. Thus, Liquid Air and The Dearman Engine Company was born.

Dearman’s technology works in three simple steps. Air becomes liquid at -196°C. One litre of liquid air is manufactured by compressing and cooling 710 litres of air. The liquid air is stored in a non-pressurised insulated tank.

To then turn the liquid back to gas, simply apply environmental heat – anything warmer than -196°C. If done in a confined space, for example, a cylinder of an engine, the result is high pressure air that can be used to power a vehicle. This technique can also be used to harness energy from intermittent renewables to liquefy and then be stored for use at another time.

Dearman’s invention is starting to garner huge attention. Earlier in the year a major new report from business and academic experts stated that Liquid Air is a proven energy storage technology that could play a critical role in Britain’s low carbon energy future. As things begin to take off for Dearman and Liquid Air, Heidi Vella speaks to the inventor and also the company director, Toby Peters, to find out more.

Peter Dearman: I started to look at cold liquid nitrogen and liquid air as a cold pouring liquid. It was very hard to find anyone who had worked on it at that time, but I found a few people who had.

"Liquid Air is a proven energy storage technology that could play a critical role in Britain’s low carbon energy future."

I started to realise that their main problem was you need to operate at very high pressures, and as soon as you drop the pressure a little bit you get a cooling effect.

You need to be able to maintain the temperature while you are expanding the gas, so I came up with the idea of using heat exchange fluid. It was just an idea, and I kept it on the back boiler for many years. That was until I saw the Tomorrow’s World programme. The university identified the same problem.

They had also produced a lot of technical papers on it and an abstract from one of them said "if you could keep the gas at ambient temperature while you are expanding it this is a commercial product." I had already figured that out. It took a few more years to develop, then I got in contact with Toby and in 2004 we got together and made a go of it.

HV: What are the advantages of using this system for energy storage?

PD: Well, the plus side is you can make the tank for storing it quite large. And, as opposed to batteries, the tank is very cheap, so you can store an awful lot of energy.

So, using it in a grid balancing system you could supply peak power for not just one day, as you would with batteries, but over several days.

Toby Peters: If you think about energy storage it is very much centred on batteries or pumped hydro. What you don’t have is this element around large scale long duration without geographical constraint, and that is what this delivers.

What you’re trying to do essentially with energy storage is warehouse wrong time wind energy and give it back when you need it, because the problem with renewable is the wind blows often when you don’t need it.

Liquid Air can provide large scale, long duration energy storage using proven components. The other thing is you can also, at the same time, harness waste heat, because you are starting at minus one hundred and ninety six degrees, which is what you are storing the Liquid Air at, when you re-gasify you can bring the temperature up to ambient or you can use low grade waste heat, which could be the back end of a steel metal generation plant.

All over the place we actually need cooling, not heating, so we can provide energy storage and waste heated power and cooling.

HV: You have a pilot energy storage plant in Slough. How is that going?

TP: That has been going for two years and that is operating on the grid. It is being used for try and avoidance demonstration. The front end of the system is the liquefaction plant, which is a fairly standard process.

In the tankage in the middle we store cryogenic gasses, and the power recovery element is turbines and heat exchange, so it is all mature components bolted together in a novel way. It works and runs regularly.

It supplies only 350 KW to the grid because it is to demonstrate the integrated system. The second plant will be about five to 20 megawatts (MW). There are things we could optimise, but now it works absolutely as it’s meant to. All the components are from existing supply chains.

HV: How efficient is it?

TP: The whole debate around energy storage is always around efficiency. There is a perceived thing that unless you have high efficiency you’re not commercially viable, but actually you have capital cost, efficiency, scalability and many different attributes to consider.

It is only now that people are realising that although Liquid Air may not be 80% efficient, it’s about 60% with ambient and 70% with waste heat, it’s probably a third of the price of batteries and the components last 25 years plus. It ticks many boxes. People have now realised that we have a host of requirements, not just efficiency.

PD: It is possibly convenient to do it both ways. Often wind energy does tend to over power the grid, if it gets too windy it can just blow the grid up. Of course, it’s quite difficult to put up a bunch of pylons, from a planning perspective that’s extremely difficult. It depends where it is but it can be done both ways.

TP: What you need to think about with energy storage is; you position it at different points within the grid. You can have it sitting alongside the generator to store there, but actually, what you really need is to store energy at the point of demand.

So you essentially move it over night during the off peak periods when you have got space on the grid and then you can service the capacity, the peak demand, without building wires all the way back. So when George Osborne talks about energy storage saving billions of pounds it’s because they then don’t have to build so many wires.

HV: What has the energy industry’s reaction been to Liquid Air?

TP: We started off with quite a lot of scepticism about the idea of liquid air as a storage system. But because we have done a very structured programme, the pilot plant is built and Peter’s engine transport has been rigorously reviewed, even if still sceptical they are willing to explore and understand that it does make sense and the economics do stack up.

Whenever you bring a new technology in you face scepticism because people don’t understand that what you’re doing is an inventive leap.

For the past 100 years using liquid air as an energy store had a fundamental flaw in it so it wasn’t efficient, so what people say is its not efficient, but you have to say "hold on a second there is an inventive step which you need to investigate."

HV: Peter, how does it feel seeing something you have worked on for so long now being noticed?

PD: It is very satisfying – rewarding. With the Liquid Air thing I realised it would take time [and] that the timing would have to be right. But I did wonder if it would ever happen in my lifetime. I actually started working on it at a very young age, 12 – 15. It’s opportunity; a lot of things are coming now that people before wouldn’t consider.

But we have a really big disadvantage now because of the hydrogen economy, which billions was spent on and not much materialised in the way people predicted it would. That has made our job much harder because people, once bitten, are twice shy.

HV: Do you think the UK Government gives enough support to energy inventors?

TP: Energy storage has fallen slightly out of the mix of support and is only now starting to get seen and given levels of support. I think to date we are very much focused on batteries and existing technologies. What I think we need to see is something that allows new disruptive technologies to come through, rather than potentially having to compete with winners that are already backed.

HV: Where are you now in the process of commercialising the technology?

"When George Osborne talks about energy storage saving billions of pounds it’s because they then don’t have to build so many wires."

There [are] lots of opportunities to advance the integration opportunities with other processes, how to make it more efficient, but can you build a plant today at 10MW, or 80MW, which would work at 60% efficiency? Yes! Can you make it better? Can you make it cheaper? Yes, but that is sort of second and third development phase.

Now we are doing the commercial discussion for first deployment. With the piston engine we are now moving to build a test engine that will be operational later this year.

There is a whole world of opportunity to make it cheaper, more efficient, but that is building on something that can be commercially viable today.

There is a big Department for Energy and Climate Change (DECC) project going on at the moment and we have two projects in there for feasibility stage, which, if we win, means we will be building one of those. We’re also talking to a number of people overseas. With any new technology it is a long tough process but I think that we are moving well down the road.