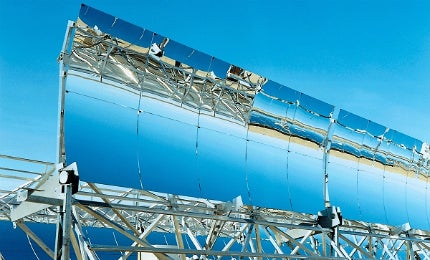 The power network in the Middle East is desperately crying out for expansion to meet rapidly growing demand from all quarters. Gulf oil producers and other countries in the Middle East and North Africa must pump almost $250bn into the power sector to expand and meet the demand from businesses and households, according to estimates by the Saudi-based Arab Petroleum Investment Corporation (APICORP), an affiliate of the Organization of Arab Petroleum Exporting Countries (OAPEC).

“A smart grid deployment programme across the Middle East would ease the burden on heavily relied upon fossil fuels.”

According to a recent report, nearly $148bn must be invested in raising generation capacity, while the rest of the investment will cover transmission and distribution of electricity supplies.

To go some way to meet these goals, in April 2012, The Dubai Electricity and Water Authority (Dewa) invited global consulting firms to submit proposals for the implementation of a smart grid strategy to “improve the effective utilisation of electricity by optimising power generation, transmission, distribution, operations and maintenance”.

Managing director and chief executive officer of Dewa, Saeed Al Tayer, said: “Dewa is now working on a smart grid strategy to identify breakthrough opportunities and challenges through the integration of smart grid applications and initiatives.”

A smart grid roadmap for the Middle East

The opportunity for investment is there but practical issues for planning and developing smart grid networks are commonplace, not least because countries across the region are at varying stages of economic development and political stability.

“According to a recent report, nearly $148bn must be invested in raising generation capacity.”

A smart grid deployment programme across the Middle East would ease the burden on heavily relied upon fossil fuels while simultaneously providing energy efficiency. The question of whether the technology can grow inside the confines of existing regulatory frameworks is one that investors must tackle when planning work and development opportunities in the region.

In addition to this challenge, there is the problem of existing grid infrastructure, which is often unable to handle swings in supply and demand, resulting in regular power outages.

Saeed Al Tayer admits that some utilities “are still facing additional barriers such as the need to change consumer behaviour, ensure cost-effectiveness and to overcome financial constraints, perceived infrastructure complexity and necessary advances in technologies.”

“Desertec represents ongoing large-scale investment in the heart of the Middle East and highlights its unlimited potential for sustainable energy.”

These challenges could however become outdated, as western companies start to penetrate more of the smart energy sector. Global companies such as Alstom are already applying their products and engineering expertise to develop grid management infrastructure.

Earlier this year, the company signed a deal with the Kuwait Ministry for Electricity and Water to implement a fully integrated grid management system for Kuwait district.

Meanwhile, smaller players are also trying to make their mark and exploit the abundant source of solar power in the region. Working with Abu Dhabi-based solar developer, Enviromena, US-based smart grid technology manufacturer, Petra Solar, says it is actively seeking people who possess the knowledge, network and market presence across the solar supply chain, from technology developers and manufacturers to consultants.

Desertec and the Super Grid

While companies such as Alstom focus on projects for one or more towns or cities, the giant clean energy Desertec project will provide the biggest consortium of global investors across all utilities and technology providers for every aspect of the power supply chain in numerous countries across the region.

“Global companies such as Alstom are already applying their products and engineering expertise to develop grid management infrastructure.”

This enormous renewable energy project, with a planned end date of 2050, aims to establish a massive network of solar and wind farms stretching across the Middle East and North Africa.

The network will then connect to Europe predominately using high-voltage direct current HVDC transmission cables. Estimated to cost in the region of €400bn (US$526bn), if Desertec meets its objectives, it could also provide 15% of Europe’s electricity by 2050.

Central to the Desertec concept is sustainable power supply and a reliable smart grid, fed with energy from all types of renewable sources in a trans-national super grid.

The ambitious project will rely on installed capacity of wind energy and photovoltaics. A major project partner and founding member of the Desertec Industrial Initiative, engineering giant Siemens, has announced it is working on producing steam turbines and solar receivers for concentrated solar-thermal power plants, as well as transmission systems across long distances with low loss.

The successful delivery of the project will also involve large consortia of utilities, politicians, economists and scientists. The Desertec Foundation says it is currently working on implementing the right political framework conditions to meet its aims, highlighting the need and opportunity for organisations to continue to invest in the region.

A partnership with the Tunisian National Advisory Council for Scientific Research and Technology has led to the establishment of DUN, a platform for scientific corporation around issues related to the project.

In addition to establishing international collaboration, DUN’s aims include boosting awareness and work for technologies for transmitting electricity across medium and long distances and of course smart grids, which lie at the heart of the projects success.

Desertec represents ongoing large-scale investment in the heart of the Middle East and highlights its unlimited potential for sustainable energy using smart grids and renewable energy sources. If the project successfully meets its aims, the energy landscape across this important region, once only known for its oil resources, will change forever.

Add to that the potential to supply electricity to large parts of Europe for years to come. While the signs from investors and technology companies currently operating in the country are promising, the future prospects and success for those investing in this region will also depend on a stable political and economic situation, in order to maximise the potential for this burgeoning industry.