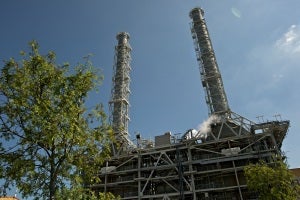 Gas has been reclassified as a green source of power by Horizon 2020, an €80bn European Union programme unveiled last year, which could have serious repercussions for the renewable energy industry.

According to a document seen by the Guardian, a large chunk of these funds that were initially supposed to be injected into the development of renewables, may now be used for the construction of more gas power stations and gas exploitation.

The news follows the release of the UK draft Energy Bill, which was designed to attract investment in nuclear and renewable energies, such as solar and wind power.

A report published by the International Energy Agency this week, however, dubbed the next two decades as a ‘golden age’ of gas, which has infuriated environmentalists.

The summary says that gas could grow by over 50% by 2035 if safety and environmental issues with hydraulic shale fracking can be overcome.

The so-called ‘Golden Rules’ outlined in the report call for the full transparency, measuring and monitoring of environmental impacts and engagement with local communities. This is in addition to careful choice of drilling sites and measures to prevent any leaks from wells into nearby aquifers.

At their recent summit, G8 leaders welcomed and agreed to review this IEA work on potential best practices for natural gas development.

International Energy Agency executive director Maria Van der Hoeven said: "To build on the ‘Golden Rules’, we are establishing a high-level platform so that governments can share insights on the policy and regulatory action that can accompany an expansion in unconventional gas production, shale gas in particular."

"We are establishing a high-level platform so that governments can share insights on the policy and regulatory action that can accompany an expansion in unconventional gas production, shale gas in particular."

The secret document seen by the Guardian has been agreed by member states and sets out the framework for Horizon 2020.

Of the funds available, more than €30bn is supposed to flow to ‘address major concerns shared by all Europeans, such as climate change’.

But the original document has been altered by officials to include references to funding for gas, despite it being a fossil fuel and a mature technology.

Although gas is a fossil fuel, because it generates less carbon dioxide when burned than coal, lobbyists from the gas industry have been touting it as a lower-carbon alternative to coal.

However, speaking at the ‘Hype or Hope? Shale gas and UK energy policy’ event hosted by London-based think tank Policy Exchange in March, Greenpeace UK chief scientist Doug Parr said that natural gases like shale could be worse for the environment than coal.

"A paper by the University of British Colombia looked at the total resource of unconventional gas, including shale gas and coal bed methane, and their estimate was that on their own, these unconventional gas resources would raise global temperatures by over 2.8°C," said Parr.

"Internationally and in the EU, an increase of 2% is considered dangerous."

Image: Funds meant for renewables could be injected into gas development. Credit: courtesy of Centrica.