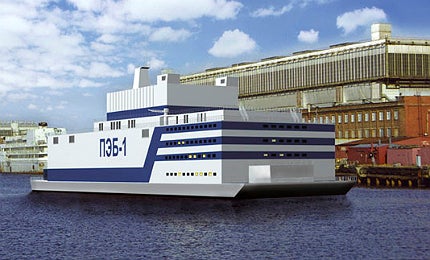 Owned by Rosatom, the 70MW power plant, known as Akademik Lomonosov, will be situated in the town of Vilyuchinsk of the Kamchatka region in Far East Russia.

The plant’s design was based on nuclear reactors that are equipped on the icebreaker ships.

After completion, the plant is expected to generate enough power to serve approximately 200,000 people, while the project will save 200,000t of coal and 100,000t of fuel oil per year.

Foundations for the project were laid in April 2007 and construction of the barge initially began at the Sevmash submarine-building plant in Severodvinsk.

In August 2008, the construction site was shifted from Sevmash to the Baltic shipyard in St Petersburg.

Akademik Lomonosov is a non-self-propelled vessel, which is 140m long, 30m wide and 10m high.

"The power plant is aimed at providing energy to large industrial projects, port cities and offshore gas and oil-extracting platforms."

The floating vessel will be equipped with a power unit of two 35MW KLT-40C nuclear reactors, or 300MW of heat and two steam-driven turbine units.

The project will have offshore and onshore facilities to transfer the energy and power generated from the plant.

The offshore vessel will accommodate the reactors, steam turbine plants and storage facilities that house nuclear fuel assemblies, as well as solid and liquid radioactive waste.

OKBM Afrikantov was responsible for the design of the reactors, manufacture and supply of the pumps, fuel handling equipment and auxiliary equipment.

Russian machine-building company Izhorskiye Zavody supplied the reactor vessels, with the first reactor delivered in May 2009, thesecond in August 2009.

The report stated that 15 countries including China, Indonesia, Malaysia, Algeria, Namibia, Cape Verde and Argentina, have expressed an interest to buy such power stations.