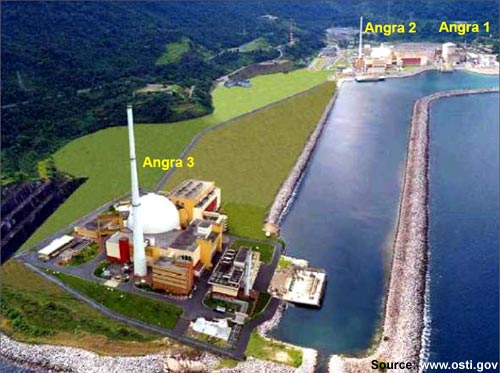 French company Areva has won a €1.25bn contract from Eletrobras Eletronuclear to construct the 1,405MW Angra 3 nuclear reactor in the state of Rio de Janeiro, Brazil.

According to the terms of the contract, Areva will deliver engineering services and components, the digital instrumentation and control system for the reactor and assist in the supervision of the installation works and the commissioning activities.

Areva president and CEO Luc Oursel said the company's selection for the contract to complete the construction of Angra 3 represents a continued collaboration with Eletronuclear that began with construction and supply of reactor services to Angra 2.

"The completion of Angra 3 confirms Brazil's engagement in an ambitious nuclear program and illustrates the relevance of this energy source as a solution for sustainable economic development," said Oursel.

"Areva will deliver engineering services and components, the digital instrumentation and control system for the reactor."

Eletronuclear has awarded a contract to Nuclebras Equipamentos Pesados (Nuclep) for the supply of three capacitors, which will condense the steam from the turbines and that makes up the system of nuclear-power generation, for the reactor.

Backed by a BRL6.1bn (€1.97bn) loan from Banco Nacional de Desenvolvimento Economico e Social (BNDES), the project, which is part of the Growth Acceleration Program (PAC), will create 9,000 construction jobs and 500 full-time positions for operations.

In December 2012, Eletronuclear's parent Eletrobras had signed a BRL3.8bn (€1.2bn) loan agreement with Caixa Economica Federal for the purchase of imported machinery & equipment and hiring of services for the Angra 3 plant.

The project, which is expected to generate enough electricity to meet one third of consumption of Rio de Janeiro, will be connected to the National Interconnected System (SIN) through an existing transmission line.