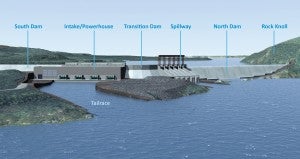 Astaldi Canada, a subsidiary of Italian firm Astaldi, has won a contract to carry out major civil works for the 824MW Muskrat Falls hydroelectric generating facility project in Canada.

The scope of the $962m contract will include construction of two dams, a power house, intake and gated spillway with works set to begin before the end of 2013 that will last for around four years.

The project is comprised of three components: the hydroelectric generating facility (where Astaldi will complete its work); 1,100 km of transmission line in the province of Newfoundland and Labrador (NL) (HVac and HVdc line); and the Maritime Link between the Provinces of NL and Nova Scotia.

Combined, the estimated cost of the project is $7.4B.

Having received approval from the Newfoundland and Labrador Government in December 2012, the plant is likely to be commissioned by 2017.

The Canadian Government had committed a loan guarantee of up to $6.3bn for the project, which is located on the Lower Churchill River, around 30km west of Happy Valley-Goose Bay, Labrador.

The federal loan guarantee will lower the costs of borrowing for the proponents, with projected savings of over a billion dollars for ratepayers in Newfoundland and Labrador and Nova Scotia.

"Having received approval from the Newfoundland and Labrador Government in December 2012, the plant is likely to be commissioned by 2017."

According to the agreements, Nalcor and Emera will use 40% (330 MW) and 20% (165 MW) of the output respectively, while the remaining 40% is not committed, most of which is likely to be used for export, mainly to New England.

Muskrat Falls, which is claimed to be the second-largest hydroelectric facility in the province, is part of the 3,000MW Lower Churchill project and will also include the 2,250MW Gull Island hydroelectric plant.

Together these projects will generate 16.7TWh of electricity annually and significantly reduce greenhouse gas emissions.