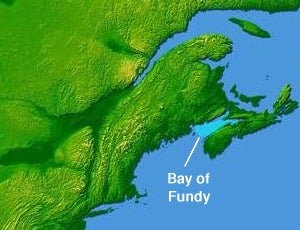 The Canadian government has awarded funding to marine energy company Atlantis Resources for its tidal energy project in the Bay of Fundy, Nova Scotia.

Government-owned Sustainable Development Technology Canada has provided $5m towards the development of the 1MW+ project.

Atlantis Resources, along with Lockheed Martin and Irving Shipbuilding, will build, deploy and monitor the turbine at the Fundy Ocean Research Centre for Energy test site in the Bay of Fundy. The turbine will be deployed in 2015.

Lockheed Martin will oversee the engineering design elements, production and procurement of major turbine components, in addition to supervising systems integration and testing for the project.

Along with other local suppliers, Irving Shipbuilding will be responsible for fabrication and assembly of the device at its Woodside Industries facility.

Canadian Natural Resources Minister Joe Oliver stated that the government is encouraging innovation and the next wave of clean technologies to help protect the environment and create jobs.

"Investment in projects such as these demonstrates our leadership in driving a vibrant clean technology industry in Canada," Oliver added.

Image: The 1MW+ tidal turbine will be built at the Fundy Ocean Research Centre for Energy. Credit: Decumanus.