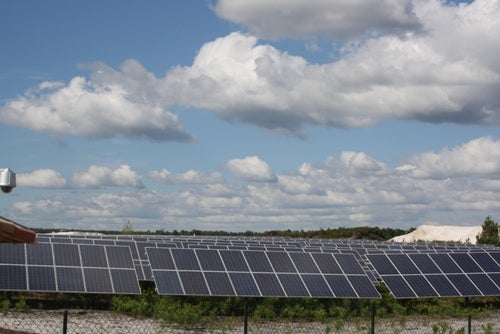 Canadian Solar Solutions, a subsidiary of Canadian Solar, has commenced construction of the 100MW AC Grand Renewable solar project in the Ontario province of Canada.

Being financed by Connor Clark & Lunn Infrastructure and developed by Samsung Renewable Energy, the plant is likely to become fully operational in 2015.

Located in the Haldimand County, the plant will feature 440,000 Canadian Solar CS6X high-performance modules, which will generate approximately 165,000MWh of electricity annually, enough to power around 13,750 homes.

The project will also include 100 1MW transformers and 200 inverters of 500kW each; a transformer substation consisting of a solar transformer (65/86/108MVA); and associated ancillary equipment, systems and technologies including on-site access roads, switchgear, control and monitoring equipment and underground cabling.

Canadian Solar will manufacture the PV modules and medium voltage power stations for the project at its new facility in London, Ontario.

Canadian Solar chairman and CEO Shawn Qu said that the project, which is being financed by Connor Clark & Lunn and developed by Samsung, has now entered the construction phase and when complete, it will be Canada's largest PV project.

"Being financed by Connor Clark & Lunn Infrastructure and developed by Samsung Renewable Energy, the plant is likely to become fully operational in 2015."

"We are highly confident in our team's ability to complete this large-scale project on schedule and on budget, while creating new employment opportunities and achieving the optimum power efficiency generation target levels anticipated to be delivered by the project," said Qu.

In June 2013, Canadian Solar had signed an engineering, procurement, and construction agreement with Grand Renewable Solar, an arm of Samsung Renewable Energy, to construct the utility-scale solar power. The agreement is expected to generate revenue of around $301.1m for Canadian Solar.

The solar power project is part of the 250MW Grand Renewable Energy Park, which is being built and operated by Samsung C&T.

The renewable energy park, which received renewable energy approval from the Ministry of the Environment on 15 June 2012, will also feature the 150MW Grand Renewable wind project, along with the solar project.

In September 2013, Samsung and Pattern Energy had completed financing for the wind project, which will feature 67 SWT-2.3-101 Siemens wind turbines, with construction set to begin shortly and expected to be completed in late 2014.