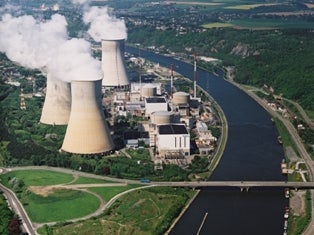 Power generator Electrabel, a unit of French giant GDF Suez, has found potential cracks in a reactor vessel at the Tihange nuclear power station located near the city of Liege in Belgium.

The news follows the shutdown of a reactor vessel at the country’s Doel 3 power plant in June, also due to cracks.

But the Federal Agency of Nuclear Control (FANC) said the cracks at Tihange 2 are "less frequent" than those at Doel 3.

"Investigations into the reactor vessel’s condition are still on-going and will have to consolidate these first results," the FANC said in a statement.

"The report describing the flaw indications in the Tihange 2 reactor vessel will be presented to the FANC in the course of next week. A justification document regarding a possible restart will also be submitted to the FANC for analysis, evaluation and a decision proposal."

The Tihange 2 facility, which uses the same reactor vessel as Doel 3, was halted in August for investigation after problems at Doel came to light.

The reactor vessels were built in the 1970s by the Dutch firm Rotterdamsche Droogdok Maatschappij, which has since ceased business.

Earlier this year, FANC said "thousands of potential cracks signs" were identified during inspections of the base of the reactor vessel at Doel 3.

"The investigation at Tihange 2 will continue and it will take several more weeks before we get definite answers. Tihange will remain halted in the meantime," a company spokeswoman told AFP.