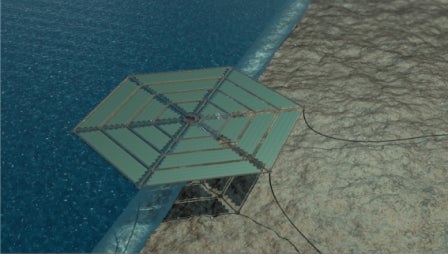 A collection of these arrays, totalling 4,200 solar panels, form a solar island equivalent of the size of a large football stadium, capable of generating 2MW of power.

"The key to creating an ocean-based structure of this size is the use of a tension-only design. Rather like a spider’s web, this dynamic, compliant structure yields to the waves, yet is capable of withstanding considerable external loads acting upon it," Kuttan said.

"From the offshore solar farm’s central island, 30kV electrical transmission lines connect, tying other islands in series to form a close loop and continue to the electrical sub-station onshore for grid connection."