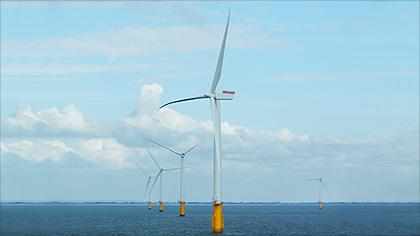 Located 8km from the Skegness shoreline in England, the £725m wind farm is a joint venture between DONG Energy, Centrica and Siemens Project Ventures.

The wind farm will feature 75 3.6MW Siemens turbines and provide enough electricity to power approximately 200,000 homes, equal to two thirds of the homes in Lincolnshire.

Half of the 75 turbines are currently generating electricity as the commissioning work has now entered the final stage.

Construction started in 2010, with the wind farm expected to be fully operational by the end of August.

The wind power plant will be connected to a new substation through two underground 132kV cables and before supplying the national electricity network, power will be increased from 132kV to 400kV at the substation located near the current one at Walpole.

"Half of the 75 turbines are currently generating electricity as the commissioning work has now entered the final stage."

Barrow and Lincs asset manager Richard Guy, who also sits on the Lincs board of directors, said there were a few delays in installing the final turbines earlier in 2013, but the wind farm is now complete and generating electricity.

Siemens Project Ventures and DONG Energy acquired a 50% stake in the project from Centrica by forming a joint venture in December 2009, while Centrica owns the remaining 50% stake.

Lincs is the third of Centrica’s wind farms to be constructed in the Greater Wash region.

Centrica’s existing Lynn and Inner Dowsing wind farms have a combined capacity of 194MW, providing enough power to meet the annual demands of over 130,000 homes.