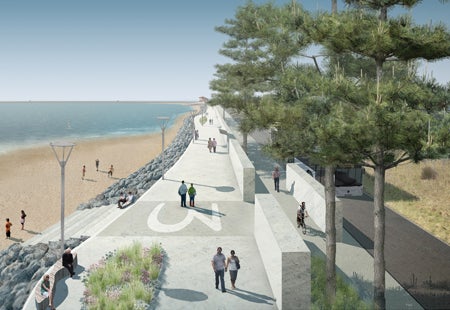 Tidal Lagoon Swansea Bay (TLSB) has begun the formal consultation process on its proposed £650m tidal lagoon in the UK.

Public exhibitions will take place at 18 locations around the Swansea Bay area until 5 August 2013.

Planned to be located in Welsh coastal waters, the proposed tidal lagoon will have a rated capacity of 240MW, generating 400GWh of electricity each year to power approximately 121,000 homes.

In order to control the flow of seawater to generate electricity, the tidal lagoon will be constructed by forming a 9.5km-long, U-shaped sea wall running from Swansea port out to sea before curving back to re-join land near Swansea University’s new Science and Innovation campus.

Plans also include construction of a turbine/sluice gate housing structure in the south-western part of the sea wall.

"The proposed tidal lagoon will have a rated capacity of 240MW, generating 400GWh of electricity each year to power approximately 121,000 homes."

The housing structure will contain between 16 and 22 hydro turbines, which will be permanently underwater.

The turbines, which will be 7m-8m in diameter, will generate electricity on both incoming and outgoing tides.

As part of the project, around ten sluice gates will be placed underwater to let seawater in and out of the lagoon without going through the turbines, as and when required.

TLSB will apply to the secretary of state for energy and climate change through the Planning Inspectorate (PINS), for a Development Consent Order (DCO).

TLSB planning head Alex Herbert said: "All feedback from consultation will be taken into account as we move towards making a planning application later this year."

Image: The tidal lagoon will be located in Welsh coastal waters. Photo: courtesy of LDA Design.