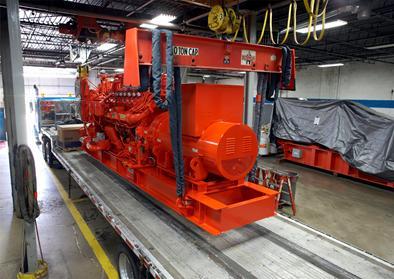 The two Waukesha APG1000 Enginator biogas engines have a capacity of 1MW each.

"In addition to increasing the amount of renewable energy being used and saving on energy costs, this project also benefits Wisconsin's economy," said Crawford.

GE's Waukesha engines in the CHP plant will be powered by an anaerobic digester that will convert the food processor's waste to biogas.

Brian White, President of GE Energy's Waukesha gas engines business, said the use of food waste as a source of biogas for such installations is still relatively new.

"The Waukesha team is excited to work closely with the Forest County Potawatomi Community to successfully bring this project to fruition as Wisconsin and other states work to diversify their energy supplies." said White.

Biogases rich in methane are specifically used to run the engines. Equally, burning the greenhouse gas in a reciprocating engine decreases the quantities of gas that can escape into the atmosphere.

Electricity generated from the two generator sets will be purchased by utility firm, WE Energies, and will be sufficient to power about 1,500 Milwaukee-area households.

The CHP plant will commence operations in April 2013.