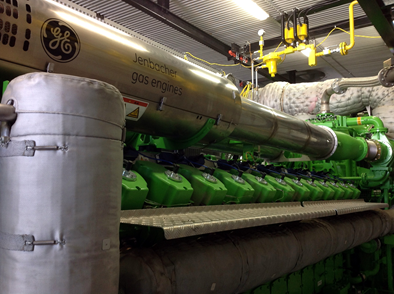 GE has unveiled a new combined heat and power (CHP) plant which will provide heat, power and CO2 to Houweling’s 125-acre tomato greenhouse in California, US.

Two of GE’s 4.36MW Jenbacher J624 two-staged turbocharged natural gas engines and a CO2 fertilisation system will be employed by the co-generation project.

Fuelled by natural gas, the CHP system will provide 8.7MW of electrical power and 10.6MW of thermal power for heating the large-scale glass greenhouses on-site.

In addition, the company said its CHP system offers a total thermalefficiency of nearly 90%.

Houweling owner Casey Houweling said the CHP system will provide heat, power and CO2 for the growth of their fresh greenhouse tomatoes while also providing power to the local utility in a short response time.

"GE’s proven technology and industry-leading efficiencies allow us to have one of the lowest CO2 footprints and water usage in the region for a power plant of this size," said Houweling.

"In fact, we plan to use the water condensed out of the exhaust gas in our operations — this will save approximately 9,500gal per day of usage from local water sources."

"We felt this project was the right thing to do for both our company and our community."

GE’s authorised US distributor of Jenbacher, Western Energy Systems, has engineered and installed the cogeneration plant.