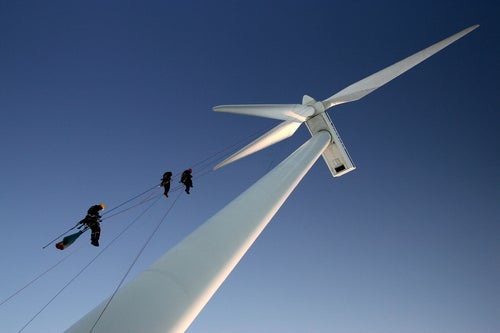 The UK has set a new record in wind energy generation, producing more than 5GW of electricity from the resource for the first time in its history.

The new record was reached on Sunday when metered wind output hit 5.058GW, according to RenewableUK.

"The quantity of low-carbon energy that wind is feeding into the grid is continuing to surge upwards."

Accounting for more than 12% of the UK’s power needs, the record amount is enough to supply electricity to nearly ten million British homes.

"The quantity of low-carbon energy that wind is feeding into the grid is continuing to surge upwards," Smith said. "We’re set to generate at least 15% of the UK’s electricity from wind by 2020.

"The UK can take control of the way we generate our power by using a secure, natural, local source of energy rather than relying on imports of expensive fossil fuels from unstable parts of the world."

Nearly 2.5GW of installed wind capacity is reportedly not metered despite being connected to local and regional power networks, and therefore not considered by the grid officials as part of national output.

RenewableUK, which noted that a two-hour observation confirmed the milestone generation of wind power, said the metered wind exceeded 4GW over a ten-hour period on 3 February.