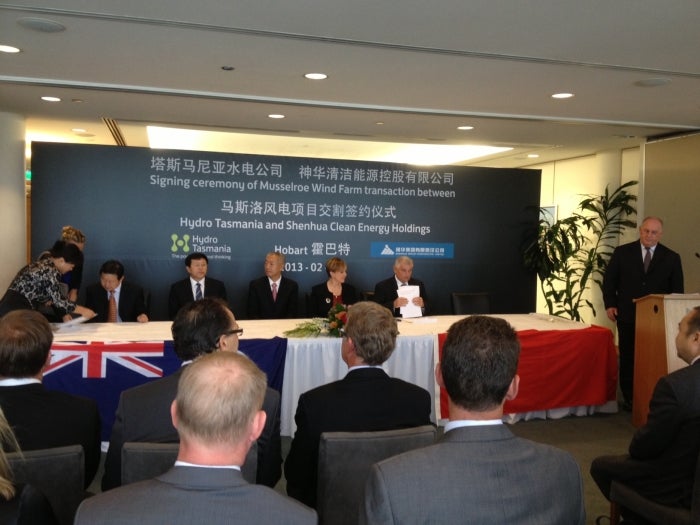 Both firms have agreed to extend their existing arrangements involving the joint ownership, management and operation of the two Woolnorth wind farms: Bluff Point and Studland Bay in north-west Tasmania.

SCE, which paid $89m for its share in the joint venture, will own a 75% stake in the 168MW Musselroe Wind Farm upon completion of the deal.

Construction on project is nearing completion, and it is expected to be fully operational by 1 July 2013, said Hydro Tasmania.

Hydro Tasmania chairman Dr David Crean commented on the deal; "Guohua, the main SCE parent company, is one of the world’s largest wind developers and brings a wealth of expertise in the renewable energy sector. Guohua has more than 4,200MW of wind energy capability operating in China."

Crean also noted that the completion of the equity and financing arrangements will now reduce Hydro Tasmania’s debt position by about $270m once the transaction is complete.

The transaction includes a project financing facility of AUD280m ($291m), and the facilities will include a $140m, 18-year tranche from Denmark-based export credit agency Eksport Kredit Fonden (EKF).

The remaining $140m, five-year tranche will be financed by NAB, Sumitomo Mitsui Banking, Bank of China, Industrial and Commercial Bank of China and Credit Industriel et Commercial based in Paris.