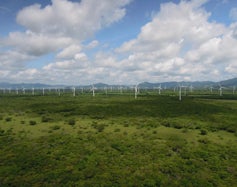 Located in the town of Juchitán de Zaragoza, in the state of Oaxaca, the wind farm is expected to start operations in 2014.

The project will feature 35 Gamesa wind turbines with 2MW capacity each, which are due to be delivered at the end of 2013.

After completion, the wind farm will increase Iberdrola’s wind power capacity in Mexico to 278MW, which will allow the company to supply electricity to about 150,000 homes in the country.

This capacity will enable the company to avoid the emission of 560,000 tons of CO2 a year into the atmosphere.

Iberdrola has three wind farms in operation in Mexico, which include the 80MW La Ventosa, the 102MW La Venta III wind farm in Santo Domingo de Ingenio and the 26MW Bii Nee Stipa in Oaxaca.

In 2012, Iberdrola generated more than 14,000MW of power and its electrical output totalled 31,800 million kilowatt hours.