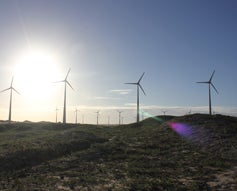 Spanish multinational electric utility Iberdrola has allocated about €25bn in the development of renewable energies in the last decade.

The company has a renewable installed capacity of more than 14,000MW with over 200 wind farms located in Spain and 330 across other parts in the world.

It will become the first Spanish firm to commission an offshore wind farm in the UK.

The 400MW West of Duddon Sands offshore wind farm will be connected to the grid in 2014.

The company noted that at the end of first quarter of 2013, about 60% of its installed capacity worldwide was emission-free.

In May, the firm opened the Santo Estevo II hydroelectric power plant in Galicia, Spain.

The plant has an installed capacity of 441MW and an estimated annual production of 1,000GW an hour, enough to power about 285,000 homes.