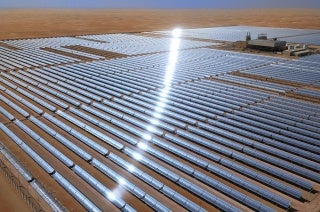 Located at Madinat Zayed over an area of 2.5 km², the new grid-connected 100MW plant will power 20,000 homes in the United Arab Emirates (UAE).

Masdar now accounts for nearly 68% of the Gulf’s renewable energy capacity and up to 10% of the global installed CSP capacity.

UAE President and ruler of Abu Dhabi Sheikh Khalifa bin Zayed Al Nahyan said at the inauguration; "Shams 1 is a strategic investment in our country’s economic, social and environmental prosperity."

"The domestic production of renewable energy extends the life of our country’s valuable hydrocarbon resources and supports the growth of a promising new industry."

The plant will concentrate heat from direct sunlight onto oil-filled pipes to produce steam, which drives the turbine and generates power.

The project uses a booster heater to heat steam as it enters the turbine, therefore boosting the cycle’s efficiency.

"With the demand for energy rising exponentially, the region is undergoing a major transformation in how it generates electricity. In fact, the Middle East is poised for major investments in renewables, and Shams 1 proves the economic and environmental advantage of deploying large-scale solar projects," Al Jaber said.

The new CSP project is expected to reduce nearly 175,000t of CO2 per year in the UAE and bring down the region’s dependency on expensive ‘peak shaving’ generators that remain idle for most of the year.

Total chairman and CEO Christophe de Margerie said; "This is a major step in the process of transforming the capabilities of solar power in the region".