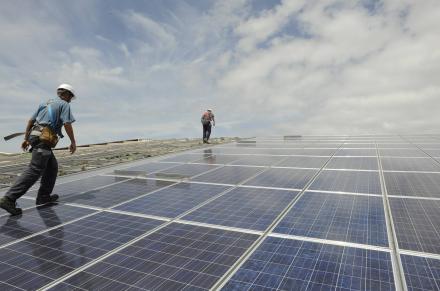 A study has revealed that nano-optics can be used to reduce waste when solar energy is converted into electricity.

The research conducted by Professor Sergey I Bozhevolnyi and his colleagues at the University of Southern Denmark, in collaboration with researchers from Aalborg University, found that metals can be used to convert light to electricity with less waste; a technique that can also be employed to produce solar cells.

With this new approach, shiny metals such as gold, silver and platinum can be converted into black metal by changing the nanostructure of their surfaces.

Black surface of the metal means most of the light that hits the surface is absorbed by the metal as the dark surface converts light into heat.

"This focusing makes for extremely efficient light absorption, with about 96% being absorbed in a wide range of wavelengths."

The Danish researchers have focused on a so-called ‘nano-focusing’ of the light to create black metal, which is touted to be more efficient than traditional methods and systematic solutions.

Professor Sergey I. Bozhevolnyi said that the light can be forced into a narrow metal groove until it stops and becomes absorbed.

"This focusing makes for extremely efficient light absorption, with about 96% being absorbed in a wide range of wavelengths," said Bozhevolnyi.

"The next step consists of studying other cheaper metals so we can continue to work towards a solution that can be used in practice."

"We’ll also be on the lookout for more efficient ways of manufacturing these surface structures."

The area of thermophotovoltaics, which is a direct conversion process, is also seen as a potential method to reduce waste.

Image: A recent study into using nano-optics found that waste is reduced when solar energy is converted into electricity and offers a new way of producing solar cells. Photo: courtesy of Colourbox.