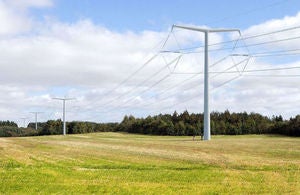 The pylon was selected through an international competition organised by the UK Department of Energy and Climate Change (DECC), the Royal Institute of British Architects and National Grid.

Designed by the Danish architects Bystrup, the pylon was chosen from 250 designs in the competition that was finally reduced to a shortlist of six.

The new design has a single pole and T-shaped cross arms, which hold the conductors and wires in a diamond earring shape.

The pylon selection comes after residents had expressed concerns that the 400,000V pylons needed to carry the wires would be much higher than those on the existing 132,000V line currently running along the route.

National Grid, however, said that at 36m high, the T-pylon is nearly one-third shorter than the traditional 400,000V lattice design.

Engineers from National Grid are working with architects to identify sections of the route where the new pylon design would have the most benefit.

"At 36m high, the T-pylon is nearly one-third shorter than the traditional 400,000V lattice design."

UK Energy and Climate Change Secretary of State Edward Davey said Britain is expected to face a significant challenge over the coming years in connecting new electricity plants to homes and businesses.

"Now communities can be offered a new choice and a radical departure from the traditional lattice," Davey said.

"A smaller pylon, one-third shorter than its predecessor, with different finishes allowing it to blend into the landscape- the T-pylon is a striking and elegant design."

National Grid project manager Peter Bryant said the proposed Hinkley Point C connection will play an important role in keeping the lights on in Britain, but people also have concerns about the height of the pylons.

"The T-pylon gives us another option as we look for ways to reduce the visual impact of this vital project on the landscape," Bryant said.

"The steel lattice pylon has served us well and will continue to be used where appropriate, but in September we’re looking forward to hearing people’s views on the T-pylon and where along the route it would be the best choice."