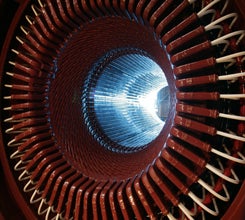 Power Machines has won a contract from Rosenergoatom to manufacture and supply a turbo-generator stator with an increased capacity of up to 1,100MW for reserve stocks of the Balakovskaya nuclear power plant (NPP) in Russia.

Located on the Volga River at Saratov, the plant has four third generation VVER-1000 pressurised water reactors of 950MWe each. Rosenergoatom had started operations of the four units in 1985, 1987, 1988 and 1993, respectively.

The contract for upgraded stator, which will be supplied by mid-2015, is part of Rosenergoatom's programme to upgrade and service the life recovery of generator equipment installed at Russian nuclear power plants to enhance the capacity.

Scheduled to be completed by 2015, the programme, being executed with the participation of Power Machines, is likely to enable reliable operation of turbo-generators in new operating modes until the end of the maximum possible operational lives of power units at the plant.

The program will increase the service life of generators, produced by Power Machines, by 25 years, enhance the inter-repair period up to two years, and extend the period between overhauls up to six years. Consequently, the plants equipped with 1,000MW turbo-generators will have an 18-month MTBR.

"The new equipment will be supplied by mid-2015 and installed in the existent enclosures of PN-1200 at the Balakovskaya plant."

Once complete, the generators' capacity will increase from 500MW to 550MW and from 220MW to 250MW respectively.

Taganrog Boiler-Making Works Krasny Kotelshchik, production facility of EMAlliance, a member of the Power Machines, will manufacture and supply two PN-1200 tube systems for low pressure heaters for the Balakovskaya plant by the end of December 2013, while it will produce other three systems in early 2014.

The new equipment will be supplied by mid-2015 and installed in the existent enclosures of PN-1200 at the Balakovskaya plant.