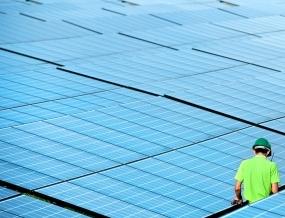 Reliance Power, the power unit of Reliance Energy has plans to invest more than INR60bn ($1.18bn) to develop solar power projects in the Indian state of Rajasthan, over the next two years.

The firm has commissioned a INR7bn ($138m), 40MW solar power plant - the country's largest solar project so far - and another 100MW solar thermal plant will be added to the site in the next year.

Reliance Power chairman Anil Ambani told local reporters that, based on futuristic policy of the Government of India as well as the Government of Rajasthan, the company hopes to double the capacity to 300MW in the next 24 months.

The long term power purchase agreement for the project, which will generate 70 million units of power, has been signed with Reliance Infrastructure and the power generated would be used by the city of Mumbai.

The project has been financed with a debt equity ratio of 75:25 by the US Exim Bank and the Asian Development Bank,reports business-standard.com.

Image: Reliance Power hopes to double solar power capacity in Rajasthan to 300MW in the next two years; Photo: worradm.