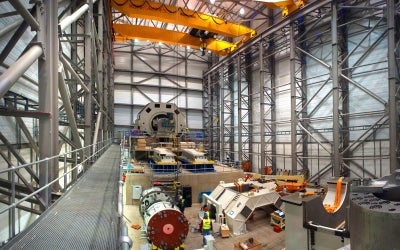 Samsung Heavy Industries (SHI) will test the drive train of its 7MW wind turbine at the National Renewable Energy Centre’s (Narec) £50m facility off the coast of Northumberland, UK, in the coming months.

Building works on the 3,000m² offshore wind turbine testing facility were completed in May.

The unit features a test rig capable of handling the performance, endurance and compressed life testing of complete nacelles, up to a 15MW rating.

The SHI nacelle will undergo a six-month programme where it will be monitored under simulated offshore operating conditions, including extreme weather events.

Narec chief executive Andrew Mill said: "The project is a message of intent from SHI and outlines the route to market which other turbine manufacturers will progressively have to follow if they are to be considered to supply UK Round 3 sites."

"Britain has a real chance to lead the world in the offshore wind sector and is being supported by Government."

UK Business and Energy Minister Michael Fallon added: "Britain has a real chance to lead the world in the offshore wind sector and is being supported by Government.

"Samsung Heavy Industries’ decision to undertake the testing of its new multi-megawatt offshore wind turbine at Narec’s pioneering test facility proves the benefits the facility can offer industry and demonstrates the opportunity for growth and jobs in the offshore sector."

The Energy Technologies Institute (ETI) is investing £25m in the facility for the design, development and commissioning of the test rig by GE Energy-Power Conversion and MTS Systems.

ETI CEO David Clarke said: "The confirmation of the Samsung Heavy Industries contract is a massive boost for both Narec and the UK Offshore Wind industry as a whole."