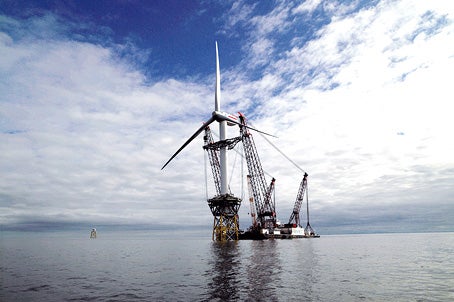 The Scottish government has approved the development of the European Offshore Wind Deployment Centre (EOWDC) in Aberdeen Bay, angering US tycoon Donald Trump.

The £230m EOWDC is a joint venture between Vattenfall, Technip and Aberdeen Renewable Energy Group (AREG).

The approval will allow the companies to build 11 wind turbines about 2.4km from Trump’s golf course.

In a statement, the property magnate attacked MSP for Aberdeenshire East Alex Salmond and described the decision as "purely political."

"As dictated by Alex Salmond, a man whose obsession with obsolete wind technology will destroy the magnificence and beauty of Scotland. Likewise, tourism, Scotland’s biggest industry, will be ruined. We will spend whatever monies are necessary to see to it that these huge and unsightly industrial wind turbines are never constructed.

"All over the world they are being abandoned, but in Scotland they are being built. We will put our future plans in Aberdeen on hold, as will many others, until this ridiculous proposal is defeated. Likewise, we will be bringing a lawsuit within the allocated period of time to stop what will definitely be the destruction of Aberdeen and Scotland itself."

"The proposed European Offshore Wind Deployment Centre will give the industry the ability to test and demonstrate new technologies in order to accelerate its growth," Ewing said.

"The EOWDC places the region at the heart of the development of cutting-edge technologies and innovation to serve UK Round 3 offshore wind developments and is anticipated to become a chief centre of European importance," McCorkindale added.

Scottish Renewables chief executive Niall Stuart said the centre will create an opportunity for companies in Scotland to develop new technology and new techniques that will be central to the development of offshore wind.

"Already, international companies such as Gamesa and Samsung have announced their intention to bring assembly and manufacturing opportunities here, and this year will also see deployment of two 7MW turbines at Methil and Hunterston – the biggest wind turbines deployed anywhere in the world," Stuart added.

The project still needs to obtain a marine license and approval for to the Blackdog sub-station.

The European Union has awarded the EOWDC a grant worth about €40m under the European Energy Programme for Recovery (EEPR) for the development of the project.

Image: The project is capable of generating electricity of about 100MW for more than 49,000 homes in Aberdeen. Photo: Courtesy of Scottish Renewables.