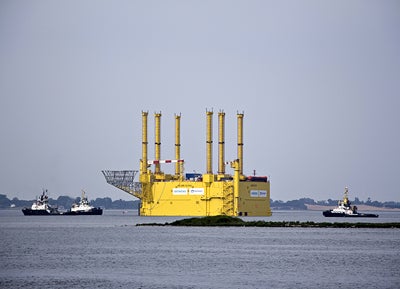 Siemens has installed the HelWin1 offshore platform in the North Sea, which will connect two offshore wind farms, 295MW Nordsee Ost and 285MW Meerwind to the mainland.

The HelWin1 HVDC platform, which has a capacity of 576MW, will transform alternating current power generated by the wind turbines, into low-loss direct current for transmission onto land.

The commissioning of HelWin1 is scheduled for the second half of 2014.

TenneT has awarded the grid connection project to Siemens for an initial period of five years, while Prysmian was also contracted by TenneT for the HelWin1 offshore grid connection in 2010.

TenneT will be able to supply clean electricity to more than 500,000 German households on the mainland.

Siemens also supplied the land-based station, which is located north-west of Hamburg in Büttel, where electricity will be converted back into the alternating current power required for feeding into the grid.

Siemens power transmission division CEO Karlheinz Springer said, "With the installation of our platform at sea we have successfully mastered the most critical part of this project and are now in the final stretch for commissioning in 2014."

"The HelWin1 HVDC platform will transform alternating current power generated by the wind turbines into low-loss direct current for transmission onto land."

TenneT management board member Lex Hartman said: "Installation of the platform for HelWin1 constitutes reaching a key milestone in our series of grid connection projects."

The transmission capacity of our projects involves a total of 6.2GW of electric power from renewable sources. TenneT is thus contributing to offshore wind energy assuming a substantial role in the future’s energy supply."

The consortium is implementing a total of four North Sea grid connection projects for TenneT, including HelWin1 and HelWin2 off of Helgoland, BorWin2 off of Borkum and SylWin1 off of Sylt.

Siemens had installed the platform’s support substructure at the location in June in the 23m-deep North Sea.

Ten steel pilings up to 3.2m in diameter and with a wall thickness of 8cm were anchored in the seabed for attachment to the structure.

The platform is equipped with a helipad and was fabricated by Nordic Yards at the shipyard in Wismar under contract by Siemens.

Image: Commissioning of grid connection HelWin1 is on schedule for 2014. Photo: courtesy of Siemens.