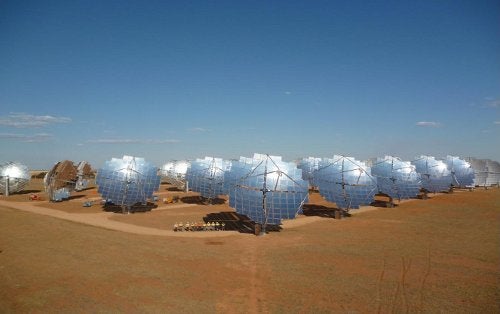 The station, which is a grid connected facility, will be used to demonstrate of Solar Systems’ Dense Array’ CPV solar conversion system.

Once operational, the system will have a capacity of 1.5MW and will generate enough electricity to meet the needs of about 500 average-sized homes.

The electricity generated by the plant will be sold to Diamond Energy, under a power purchase agreement signed in December 2012.

Solar Systems has secured a $10m funding package from the Victoria State Government towards its Mildura demonstration facility and related product development programme.

The company has also secured additional financial aid from the Federal Government of Australia for the project.

Silex CEO Michael Goldsworthy said the commencement of operations at Mildura facility is a major milestone in the commercialisation of Solar Systems ‘Dense Array’ CPV technology.

"The first array consisting of ten dish systems has been successfully commissioned and is operational, with the remaining three arrays of 30 dishes to be brought online progressively over the next few weeks," Goldsworthy added.

As part of the next phase of the project, the company said it will expand the facility to 100MW with construction expected to start in late 2014, subject to successful operation of the demonstration site.

The plant, which is expected to be operational by the third quarter of 2013, will represent the first offshore demonstration facility using Solar Systems’ Dense Array CPV dish technology.