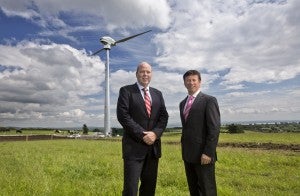 Under this working partnership, Power NI will purchase electricity generated by Simple Power’s 200 medium scale single wind turbines which will be installed across Northern Ireland over the next five years.

Paul Carson, Simple Power chief executive, said this announcement is an important milestone for landowners, the local community, political leaders and others in Northern Ireland who support wind energy development.

"Our partnership with Power NI not only meets demands for Northern Ireland’s renewable energy generation now and in the future, it is also benefitting the local economy by creating a strong local workforce to support this new green economy.

"Medium scale wind development, in the form of the single wind turbines we develop, also supports the rural economy by enabling farmers and landowners to participate in renewable generation."

Stephen McCully, Power NI managing director, said: "This relationship helps Power NI build on our strong links with both the farming and agricultural sector and is a pivotal alliance in ensuring Northern Ireland has a more secure energy future."

Simple Power has also committed to generating 50MW of clean, renewable electricity, which is enough to power about 50,000 homes, for distribution by Power NI.