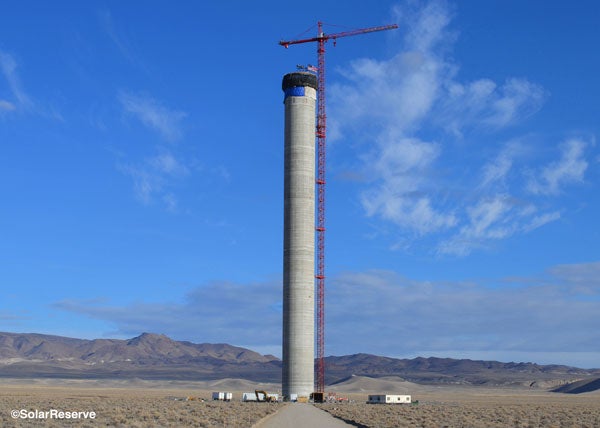 SolarReserve has completed the assembly of molten salt receiver panels at its 110MW Crescent Dunes solar thermal power plant in the US state of Nevada.

The panels are installed on top of the 540ft solar power tower, which was completed in February 2012.

US-based SolarReserve and its technology partners have developed the solar thermal technology, which uses molten salt receivers comprised of panels formed by hundreds of alloy tubes.

The receivers absorb and store the heat from the sun to generate electricity.

Upon completion, expected later this year, the power project will be able to store ten hours of full load electricity production, enough to power 75,000 homes.

SolarReserve, ACS Cobra Group and Santander Group jointly own the solar thermal plant, while ACS Cobra’s affiliate Cobra Thermosolar Plants is serving as the general contractor for the project.

NV Energy has signed a 25-year power purchase agreement to buy the electricity generated by the Crescent Dunes facility to serve homes across Nevada.

SolarReserve CEO Kevin Smith said: "The energy storage capability of this technology solves the problem of intermittency typical of other renewable energy sources.

"Additionally, because of it high efficiency, this technology can generate almost twice as much energy as a comparably sized solar facility, including facilities powered by photovoltaic panels or by a direct steam tower," Smith added.

Image: Molten salt receiver panels have been installed on top of the 540ft solar power tower.