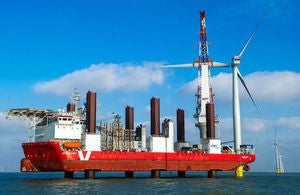 The development of the UK’s offshore wind power is at risk due to weak and vague signals from the government on the long-term future of renewable energy, according to a report from the Institute for Public Policy Research (IPPR).

The report states that given the UK’s geographical position and industrial traditions, offshore wind power offers enormous potential, both domestically and as an export sector.

Both the existing government and the previous one have set out a role of offshore wind in diversifying the UK’s energy mix and reducing carbon emissions.

The IPPR agrees that the sector creates a large number of jobs in manufacturing, construction and maintenance, and helps to rebalance the economy, both spatially and in terms of balance of trade.

However, the report warns that there are two major challenges, the first being that offshore wind is currently more expensive than other low-carbon technologies such as onshore wind and nuclear.

The second challenge according to the report is that British workers only produce around a third of the components in the offshore supply chain, ‘reducing significantly the local value of the sector’.

"The report states that given the UK’s geographical position and industrial traditions, offshore wind power offers enormous potential, both domestically and as an export sector."

Report authors Clare McNeil, Mark Rowney and Will Straw said: "Developing a strong supply chain that includes all major aspects of the manufacturing and construction process is crucial to maximising the local value of the offshore wind sector, while achieving scale is crucial to bringing down the long-term costs of the energy it produces."

Commenting on the study, RenewableUK external affairs director Jennifer Webber said the report makes a number of key recommendations, which if adopted by the government, would stimulate the healthy growth of the offshore wind industry not just for the rest of the decade, but also in the future.

"It rightly notes that we’ve made progress on the development of the UK supply chain in areas such as manufacturing foundations and electrical equipment, but we must ensure that we reap the full manufacturing benefits by bringing big offshore turbine factories to ports around the UK rather than seeing them sited elsewhere in Europe," Webber said.

The UK currently has 20 operational offshore wind farms with a total installed capacity of 3.3GW, enough to power over 2.3 million homes in the country.