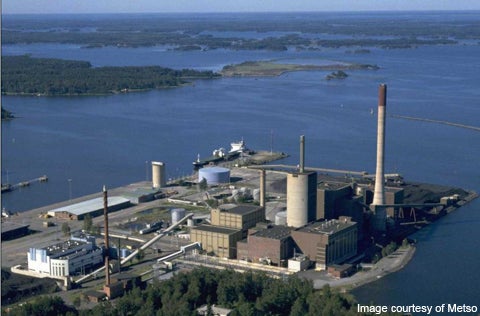 The €40m, 140MW plant was developed by global engineering and technology firm Metso on the site of the company's existing 565MW Vaskiluoto 2 coal-fired plant.

It is expected to cut coal use by about 40%.

Metso installed a large-scale KUVO drying plant and a circulating fluidised bed gasifier at the project and was responsible for fuel handling and modification work on the existing coal boiler.

"The operational experiences so far indicate that the 140MW bio-gasification plant functions as planned, and the produced gas burns cleanly in the coal boiler and reduces emissions."

"Coal boilers still account for the majority of power production in the world," Holmala added.

"Bio-gasification technology of this scale offers a new, cost-effective option for increasing the share of biomass and, consequently, for significantly decreasing the use of and emissions from coal."

Metso said that nearly half of the coal used by the plant can be replaced with gasified biomass and the gasification process will significantly extend the life of the current power plant.

The plant is anticipated to reduce carbon-dioxide emissions by 230,000t per year and provide both heating and electricity to about 61,000 residents in Vaasa.

Image: The biogasification plant is expected to reduce carbon-dioxide emissions by 230,000t per year. Image courtesy of Metso.