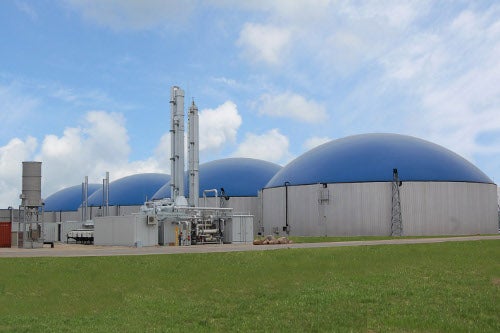 Germany-based biogas plant maker WELTEC BIOPOWER announced that its biomethane plant, located in the town of Arneburg, in the state of Saxony-Anhalt, has commenced operations.

Designed by WELTEC and built in eight months, the biomethane facility started feeding power into the public grid last month.

The plant uses 250m³ of raw material to produce heat, while it deploys chemical amine treatment to convert the gas into about 700 standard cubic metres of processed biomethane every hour.

The gas produced from the plant contains 99% of methane, which is enough to supply power and heat for 5,000 homes.

The gas produced from the plant contains 99% of methane, which is enough to supply power and heat for 5,000 homes.

Local farmers deliver over 70,000 tonnes of the substrates to produce the methane in a year.

The biomethane refinery is located in an agricultural region, which has high proportion of grassland to secure supply of raw material, while the production waste is also converted to energy at the biomass power plant.

WELTEC BIOPOWER director Jens Albartus said: "The biomethane refinery in Arneburg demonstrates that we must provide the right answer to the growing demand for biomethane for the various utilisation paths."

Image: The Arneburg plant delivers about 700 standard cubic metres of biomethane an hour, with a methane content of 99%. Photo: Courtesy of WELTEC BIOPOWER.