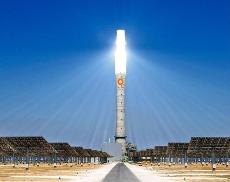 The AFD is co-financing the project, along with the African Development Bank, Clean Technology Fund (CTF), European Investment Bank (EIB), KfW and the World Bank.

Once operational, the plant is estimated to produce 516GWh of electricity annually, which is enough to power around 200,000 homes and curb nine million tons of CO2 emissions over a projected 20-year plant life.

The proposed project is a 540MWt tower and mirror design, configured to operate as a partial baseload unit and uses molten salt as a thermal circulating fluid and storage medium to achieve a 60-65% annual load factor.

The plant will feature a circular solar field of heliostats focusing the solar radiation in two-axis tracking towards a molten salt central receiver located in a high tower and from this receptor, the molten salts will be driven to an exchanger to produce superheated steam for generating power in a conventional steam turbine.

"The plant is estimated to produce 516GWh of electricity annually, which is enough to power around 200,000 homes."

The project is being carried out in two phases, with the first phase involving a review of the preparatory work already carried out by Eskom, including the project concept and preliminary design, while the Capital Expansion Department (CED) will undertake procurement and construction supervision and management in the second phase.

Earlier in November 2012, a consortium of Tractebel Engineering, Astrom Technical Advisors and PD Naidoo & Associates was selected by Eskom to provide engineering and project management for the project.

Eskom CEO Brian Dames said that the CSP plant is one of the company’s first utility scale projects outside of the existing hydro portfolio that will help it to curb its carbon footprint.