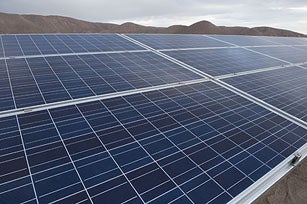 Chilean developer E-CL, a subsidiary of GDF Suez, has submitted an environmental impact statement to the environmental evaluation services of the region of Arica, seeking approval to develop a 300MW solar PV power plant in northern part of the country.

The Pampa Camarones plant is likely to feature either around 1,200,000 crystalline silicon PV modules of 300Wp each, or another thin-film type technology or concentrator with a capacity of about 356.5MWp (DC) or 300MW (AC).

Pending approval from the regulatory authorities, the construction of the plant, which will be built with an investment of $620m, is likely to begin in January 2014.

"The company will connect the plant to Chile’s northern electricity grid."

The company will connect the plant to Chile’s northern electricity grid (SING) at its future Vitor substation and will inject the output to the grid through three aerial electricity transmission lines being built in the region.

In addition, the company in February 2013 has proposed to construct the 40MW Planta Solar Fotovoltaica El Aguila II PV project in the same province, with an investment of $100m. Pending approval, construction of the plant, which will feature 161,000 solar modules, is likely to begin in September 2013.