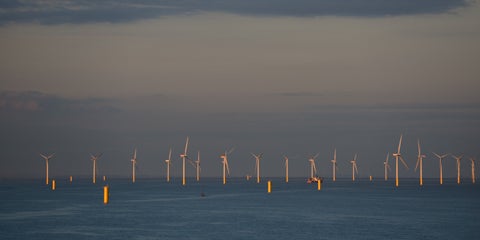 Of the total 160 turbines, 58 are already installed, with the first turbine now feeding electricity into the grid. The wind farm is located approximately 12km off the coast of north Wales.

RWE Innogy COO Paul Coffey said Gwynt y Môr has celebrated a number of significant achievements within the industry throughout its construction to date but this tops them all.

Coffey said, "We’ve gathered a lot of experience in the offshore sector in recent years, which has helped us to deal with the challenges of increased water depths, unpredictable weather and increasing distances to shore.

"We’re delighted to have reached this milestone and we are in great shape to achieve full operation in 2014."

"The project completion is expected in late 2014, while the wind farm will have an installed capacity of 576MW, enough to power 400,000 residential households."

Siemens is providing supply turbines to the wind farm, which will have a capacity of 3.6MW each and are installed at water depths of up to 28m.

Stadtwerke München CEO Florian Bieberbach said generation of the first ever kilowatt hour of energy from offshore wind is an important milestone.

"The green energy generated by offshore wind farms is an important part of the renewable growth strategy of Stadtwerke München," Bieberbach said.

The project completion is expected in late 2014, while the wind farm will have an installed capacity of 576MW, enough to power 400,000 residential households.